WALLA WALLA, Wash. - The Walla Walla County Commissioners have released a statement on so-called "coronavirus parties" in the county.

The organization said it has become aware of people holding social gatherings and said one gathering was "reported initially as a 'coronavirus party' but was later identified as a social gathering," like a birthday party or Easter gathering.

The Walla Walla County Commissioners are now "reviewing the facts" of the gathering.

You can view the full release below: 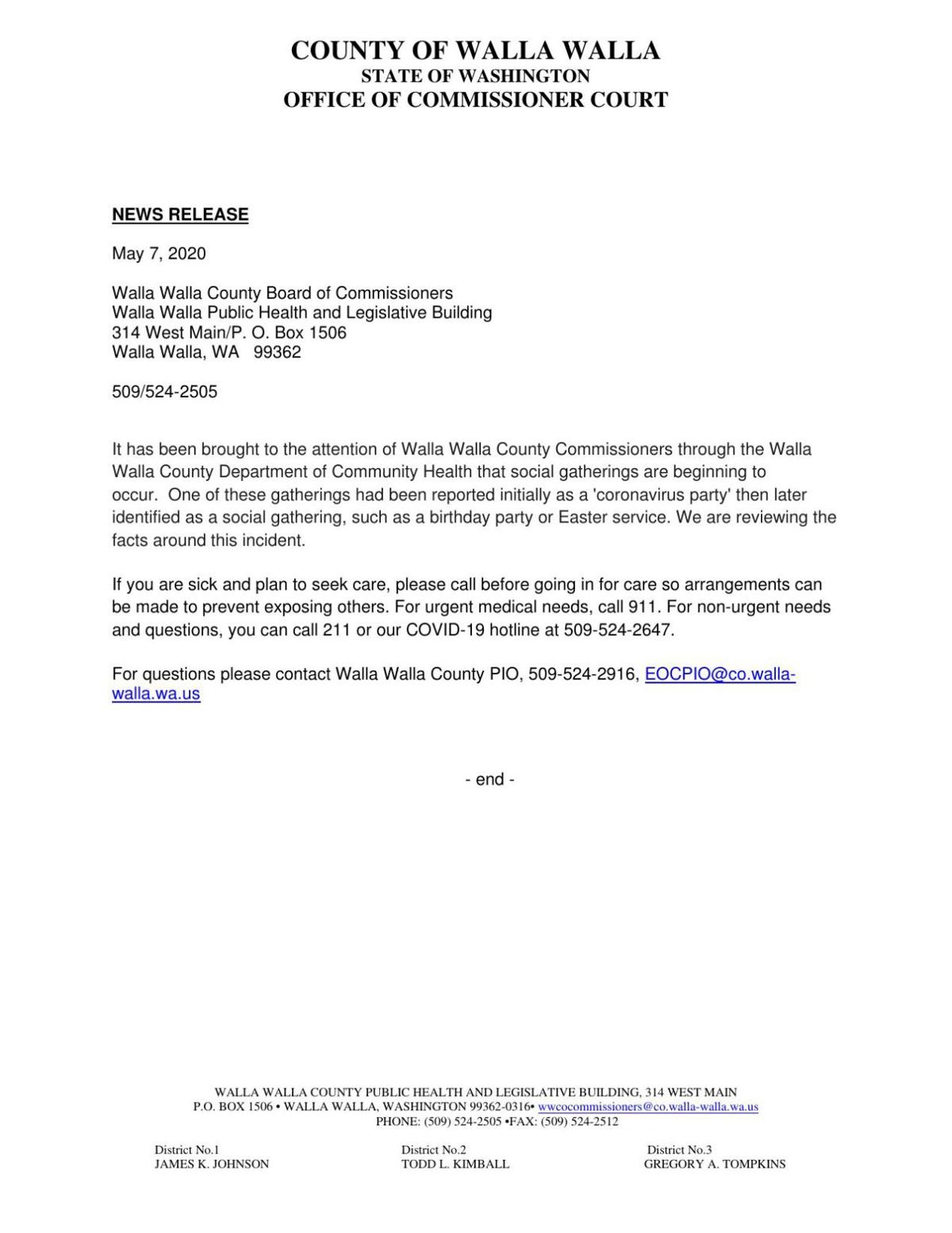 WALLA WALLA, Wash. - The Director of Community Health for Walla Walla County, Meghan DeBolt, is walking back on her statement that county residents held "coronavirus parties' to mingle with people who tested positive for the novel coronavirus.

Several national newspapers and networks picked up the story after DeBolt was quoted in the Walla Walla Union Bulletin confirming these parties were happening in Walla Walla County.

DeBolt told the Union-Bulletin on Tuesday that through contact tracing, public health officials have interviewed and identified some people that intentionally got together in groups with people who tested positive and exposed themselves to the virus to gain immunity.

KHQ spoke with DeBolt Wednesday night to clarify her comments after she began walking them back with multiple other media outlets, including the New York Times.

I'm deleting my tweet about the supposed "coronavirus parties" in Walla Walla, as the county has contacted me and other reporters to retract their comments. They now say the parties were apparently not intentional.https://t.co/m3Jq0eoWMC pic.twitter.com/ZyKr0yMhNg

DeBolt told KHQ the parties were not held with the intention of spreading the coronavirus, but instead, people were simply having parties and not caring if someone who tested positive with the novel coronavirus was there. Her most recent statement contradicts what DeBolt originally said.

The Washington State Department of Health issued a statement Wednesday evening, saying they were alarmed at reports of the parties.

We've been getting reports of “coronavirus parties” where uninfected people are mingling with #COVID19 positive individuals intentionally to try to contract the virus. Bad idea! This is dangerous and puts people at risk for hospitalization or even death. https://t.co/3hZYF7KjQN

“Gathering in groups in the midst of this pandemic can be incredibly dangerous and puts people at increased risk for hospitalization and even death,” John Wiesman, the Washington State Secretary of Health said. "Furthermore, it is unknown if people who recover from COVID-19 have long-term protection. There is still a lot we don’t know about this virus, including any long-term health issues which may occur after infection. This kind of unnecessary behavior may create a preventable uptick in cases which further slows our state's ability to gradually re-open.”  ​

Gathering in groups larger than five people or with those outside of your household is restricted under Gov. Inslee's "Stay Home, Stay Healthy" Order.

Update: The Director of Community Health for Walla Walla County, Meghan DeBolt, is walking b…

Remembering those we've lost to COVID-19

In the last year we've lost thousands of family members, friends and co-workers to COVID-19. We'd like to give you a chance to honor their memory.

Do you have a question about the Coronavirus outbreak?

Key metric used to lift mask mandate has been surpassed