The family of WSU freshman Sam Martinez who died from alcohol poisoning at the Alpha Tau Omega fraternity released a statement after 15 men were charged for giving alcohol to minors.

"While the charges may lead to some level of accountability, this is not justice. It does not bring us closure," Martinez's family wrote.

The family said they are disappointed that no one is facing charges of hazing, claiming the Pullman Police Department allowed the statute of limitations for those charges to expire.

"WSU identified multiple instances of ATO members hazing pledges during activities that involved alcohol violations and abusive behavior," Martinez's Family wrote. "What happened the night Sam died was not an isolated incident. WSU, the ATO national office and others knew this chapter had a long history of alcohol and student conduct violations. Yet they did nothing."

The family is continuing to call for transparency by universities and fraternities to allow access to records about behavior and disciplinary history.

"A boy dies. His family and friends are shattered. Promises of reform are made, and broken," Martinez's family wrote. "We say enough. It is time for universities, fraternities and policymakers to enact meaningful reforms that end this toxic culture." 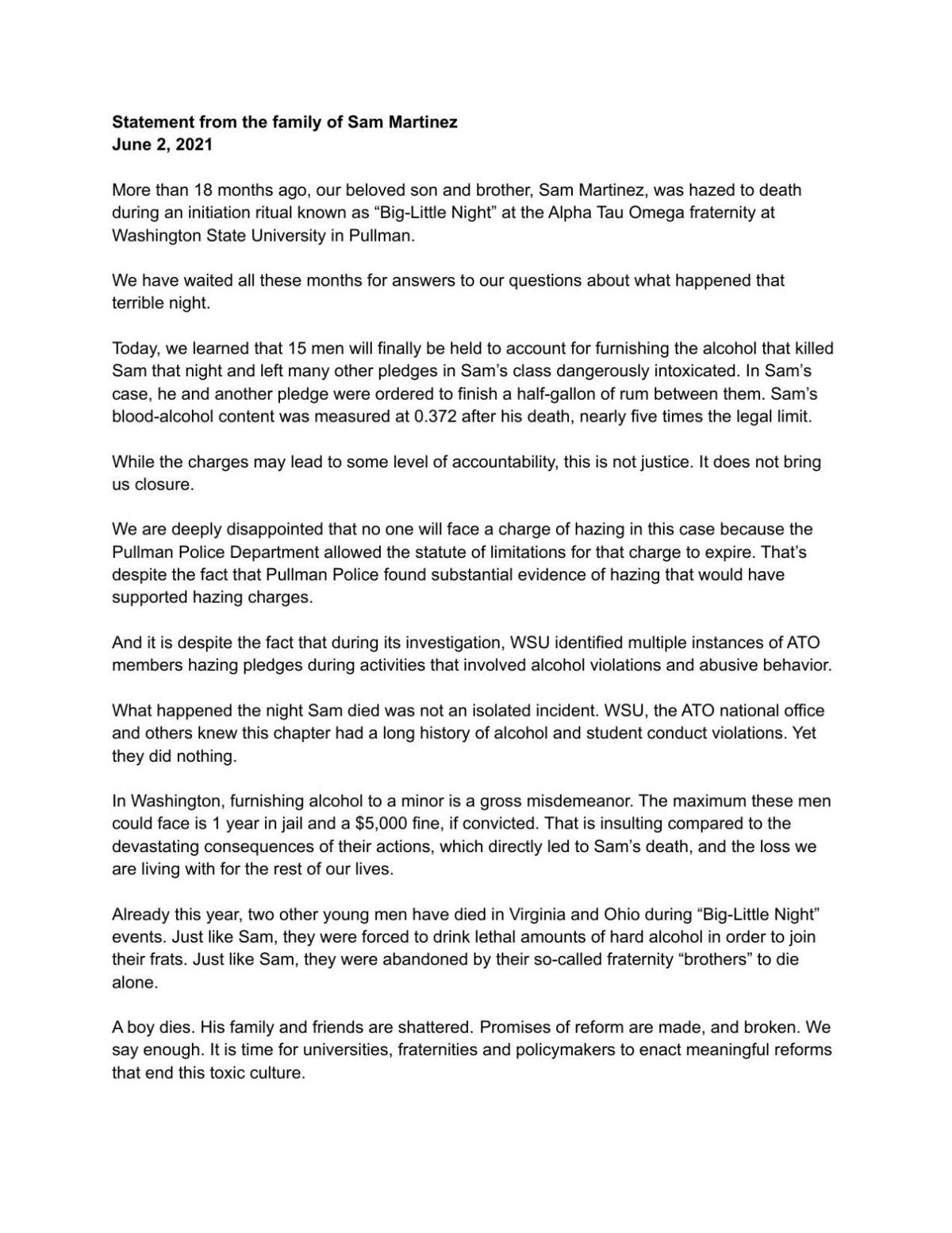 WHITMAN COUNTY, Wash. - Fifteen members of the Alpha Tau Omega fraternity at Washington State University are facing charges of Furnishing Liquor to Minors. The charges are connected to the death investigation of Sam Martinez, a pledge at the fraternity.

The charges are gross misdemeanors, carrying a maximum sentencing of up to one year in jail and a $5,000 fine. The court documents name Sam Martinez as one of the minors involved in the incident, but other minors are also listed in the documents as well.

In November of 2019, Martinez died from alcohol poisoning. He was found inside the Alpha Tau Omega fraternity following a Greek function.

A police investigation is looking at whether drinking and hazing may have lead to his death.

The 15 men are each charged with allegedly supplying alcohol to one or more pledges at a fraternity event that was part of an initiation process.

The Interfraternity Council at WSU released a statement in January of 2020 announcing the need for change in the fraternity community. You can read their full statement here.

PULLMAN, Wash. - After a preliminary investigation seemed to rule out hazing as a potential …

PULLMAN, Wash. - According to Washington State University Vice-President of Communications, …

PULLMAN, Wash. - According to the Whitman County Coroner, Sam Martinez died at 4:30 a.m. the…

Need help setting up a COVID-19 vaccine appointment? Here's what you should know:

Horse dies while in SCRAPS care