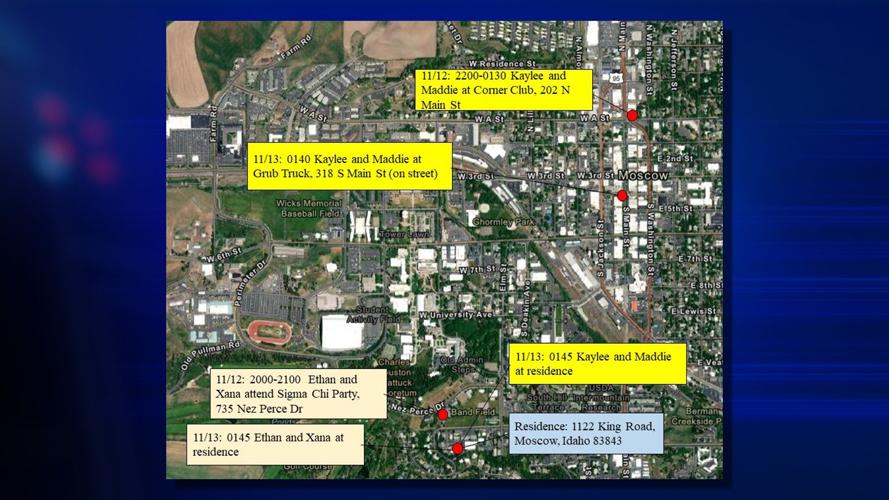 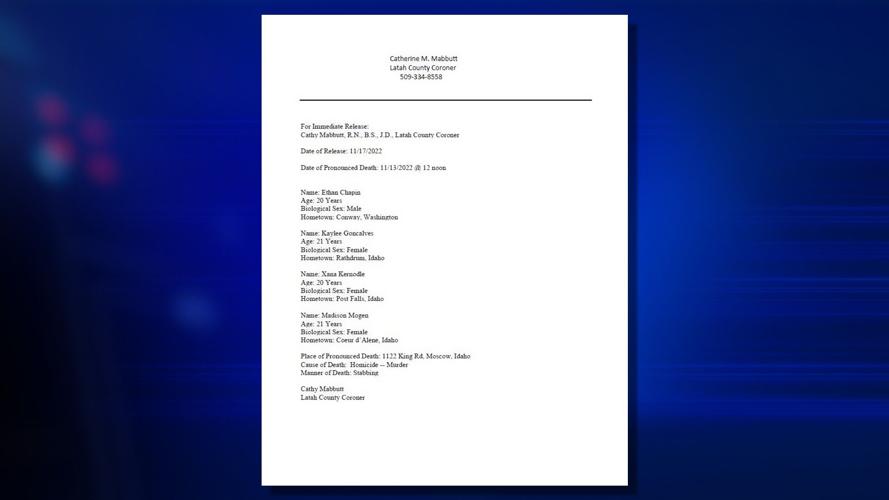 MOSCOW, Idaho - The City of Moscow Police Department (MPD) shared a map detailing the timeline of events that led up to a mass stabbing that left four University of Idaho students dead.

MPD shared the map alongside a request for help from the public. The department requested anyone with information on the case to call the Tip Line at 208-883-7180 or email tipline@ci.moscow.id.us.

The Latah County coroner confirmed all four victims in Moscow last weekend were stabbed to death.

In a report based on autopsy results, Coroner Cathy Mabbutt identified the cause of death of 21-year-old Madison Mogen, 21-year-old Kaylee Goncalves, 20-year-old Xana Kernodle and 20-year-old Ethan Chapin as "murder", and the manner of death as "stabbing".

No other information about the students' deaths was confirmed.

The Moscow Police Department (MPD) held a news conference Wednesday sharing updates on the investigation into the homicide of four University of Idaho students on Sunday.

MPD Chief James Fry repeatedly acknowledged the suspect "is still out there," but reiterated that the department believes this was an "isolated, calculated attack on the victims."

“We cannot say that there is no threat to the community,” said Fry.

The remarks came after days of police telling the community there wasn't a threat but stressing the need to stay vigilant.

You can find our full coverage on the news conference here.

According to Latah County Coroner Cathy Mabbutt, the autopsies have been completed, and she will confirm what details she can release with law enforcement and the prosecuting attorney Thursday morning.

Statements from the Latah County coroner on Tuesday shed additional light on the alleged homicide of four University of Idaho students on Nov. 13.

“Gruesome. I’ve never seen anything like this in the 16 years I’ve been in this position,” said Cathy Mabbutt, the Latah County coroner who is investigating the four U of I bodies.

Mabbut said she hopes the autopsy will be finished by Nov. 16.

The FBI shared on Tuesday it will now assist the Moscow Police Department in investigating the homicide.

The University of Idaho has postponed the candlelit vigil for the victims until Nov. 30. Classes continued Tuesday as normal.

GoFundMe fundraisers have been created for three of the victims. You can support Madison Mogen and Kaylee Goncalves's families here, Xana Kernodle's family here and Ethan Chapin's family here.

Also: @uidaho has postponed the vigil for the victims. It will now be held after fall break which ends Nov. 25, per university spokesman Kyle Pfannenstiel.

Classes are continuing today as normal.

The Moscow Police Department has released information on the killing of Four University of Idaho students over the weekend.

Although no weapons have been found, investigators believe a knife was used to in the killing.

Autopsies are scheduled to be performed later this week and investigators are hopeful this will provide definite information on how the students were killed.

At this time there are no suspects in custody. The Moscow Police Department, Idaho State Police and State and federal law enforcement partners are investigating this case.

Investigators are asking anyone with information about this incident to contact the Moscow Police at 208-883-7054.

The University of Idaho (U of I) community was rocked on Sunday, Nov. 13 when four people were found dead near the campus in a suspected homicide.

The four victims were later confirmed to be U of I students, identified as 21-year-old Madison Mogen, 21-year-old Kaylee Goncalves, 20-year-old Xana Kernodle and 20-year-old Ethan Chapin.

Moscow Police Department (MPD) has not released details of the incident, but they say there is no threat to the public at this time.

While MPD has not released details, Moscow mayor Art Bettge said he believes it was a "crime of passion."

In a statement on the incident, Bettge said, "This tragedy serves as a sobering reminder that senseless acts of violence can occur anywhere, at any time, and we are not immune from such events here in our own community. Today, we grieve for those who were lost and those they leave behind. Let us come together in support of each other, and be there for each other, as we mourn as a community."

Family and friends of the victims have shared countless memories and tributes online. Family of Goncalves also asks for online speculation to stop, saying, "We all have social media. We see all the comments. The misinformation being spread is unfair to everyone involved."

A vigil will be held on Wednesday at 5 p.m., though the location has not been determined yet. The community is invited to pay respects to and remember the four lives lost on Sunday.

The four students killed near the University of Idaho have been identified.

Right now, the investigation is ongoing.

Four people killed in Moscow on Sunday have been confirmed to be students at the University of Idaho (U of I).

University President Scott Green announced the news on Sunday night in a notice that all classes will be closed on Monday, Nov. 14 out of respect for the loss. "It is with deep sadness that I share with you that the university was notified today of the death of four University of Idaho students living off-campus believed to be the victims of homicide," he said. The families of the students have been notified.

Classes will resume normal schedules on Tuesday, Nov. 15. Students impacted by the loss are encouraged to use U of I resources as needed, including the Counseling and Testing Center on the third floor of Mary Forney Hall, or by calling 208-885-6716 for support. If calling in evenings or on weekends, press option 3. Students can also visit the Dean of Students office in TLC 232 for assistance.

Immediate drop-in counseling support will be available on Monday from 8 a.m. to 5 p.m. on the fourth floor of the ISUB.

Moscow Police Department (MPD) is still investigating the incident and does not believe there is any active threat to the community at this time. Further details will be released as they become available.

If anyone has information related to the case and has not spoken to police already, call MPD at 208-882-2677.

Four people were killed in an apparent homicide in Moscow on Sunday, according to the Moscow Police Department. MPD continues to investigate.

Officers responded to a call on King Road at about noon, for an unconscious person. When they arrived, officers discovered four dead bodies.

MPD said they would release more information when next of kin is notified.

The Moscow Police Department is investigating a homicide on King Road near the University of Idaho (U of I) campus.

U of I sent an emergency text saying the suspect isn't known. The alerts urged nearby resident to avoid the area and stay in place.

This is a breaking news story and will be updated as we learn more.

MOSCOW, Idaho - The search for a killer continues on the Palouse as four families anxiously await any updates. The bodies of U of I students M…

A collection of our coverage of the murder of four murdered University of Idaho students on Sunday, Nov. 13.

According to Latah County Coroner Cathy Mabbutt, the autopsies have been completed, and she will confirm what details she can release with law…

'The tableau changes by the day:' City, Camp Hope near agreement as restraining order stays in place