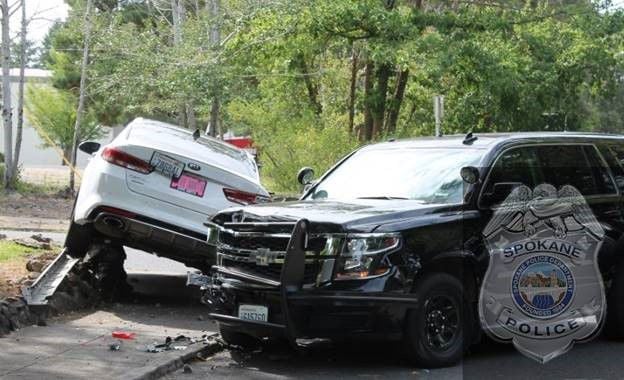 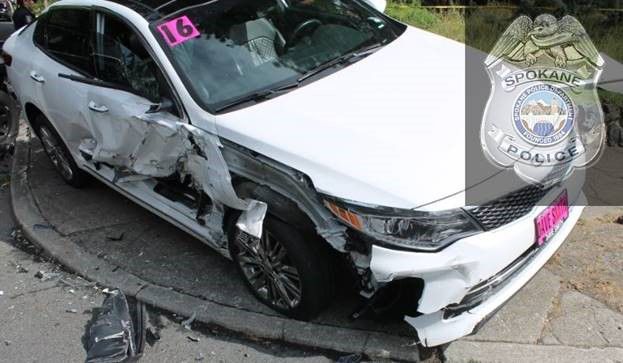 SPOKANE, Wash. - A test drive of a car from a local dealership quickly turned into a kidnapping situation, leading to a pursuit with police before multiple patrol cars were damaged and one officer was injured Saturday afternoon.

According to court documents obtained by KHQ, a woman, later identified as 32-year-old Kasandra Ayala, arrived at a dealership with a man and child to test drive a 2016 Kia Optima.

While test driving the vehicle, she dropped off the child in the area of E 9th Avenue and S Thierman Road and seemed very paranoid. The dealership employee told her the test drive was over and instructed her to return to the dealership.

According to the court documents, Ayala ignored the instruction and said something to the effect of "Hope you're ready to die today," and "We're going to Walla Walla."

At about 2:00 p.m., the employee called Spokane Police and advised them of the situation.

The employee stayed on the phone with police too and helped them eventually locate the car, with patrol units attempting to pull it over. The driver didn't stop and continued at relatively-low speeds, with the employee still unable to escape.

Ayala eventually stopped and the man accompanying her got out of the car. However, the dealership employee wasn't able to get out.

The victim advised that the woman was stating she wasn't going to pull over and he thought she was going to harm him. A police dispatcher could hear the woman in the background during the 911 call, with the woman exclaiming she knew he was on the phone with police but she wouldn't stop.

The low-speed chase continued into a parking lot, and officers attempted to block the vehicle in, but she avoided them and continued out of the lot and back onto the street while increasing their speed.

Ayala ended up in the area of 14th & Latawah, a dead end, and officers again tried to block the vehicle in. She then drove through the police cars, striking three of them.

An officer recognized the event was escalating to a higher-level of danger to the victim and the public at large, so a sergeant struck the vehicle with his patrol car, effectively ending the incident.

Ayala and the officer sustained minor injuries, with both being transported to the ER for evaluations. Three SPD black-and-white vehicles and the sergeant's vehicle were damaged.

Ayala was charged with kidnapping, taking a motor vehicle without permission, and several counts of assault. SPD says she has had prior contact with law enforcement in the area. She also later admitted to consuming methamphetamine, according to the court documents.

The documents also said Ayala told an officer her occupation is to cleanse the world of demons by collecting them in her body.

SPOKANE, Wash. After a busy weekend with several pursuits in Spokane, the city is now dealing with a patrol vehicle shortage.

Man facing charges for fatally stabbing his dog, leaving it in a dumpster to die