The Washington State Association of Broadcasters and Allied Daily Newspapers of Washington is asking WSU administration to address an incident involving WSU Head Coach Mike Leach and a Spokesman-Review columnist and additionally asking that Leach offers a public apology.

Following WSU's seventh-straight Apple Cup loss to Washington this past Friday, a question at the post-game press conference prompted a frustrated Leach to lay into John Blanchette, a columnist with our partners at the Spokesman-Review.

The S-R published an excerpt of the exchange after Blanchette asked a question about recruiting classes. S-R Sports Editor Ralph Walter said Blanchette's question was "both professional and appropriate in light of Leach's seventh straight loss to Washington."

"We didn't win this one and I don't care to have a big discussion with you on it because I don't care what you think," Leach said in the exchange with Blanchette. "You run your mouth in your little column like some sanctimonious troll, where you've never been fair or even-handed with us, so I really don't care what you think. Go ahead, cause you're going to write some nasty stuff anyway, like you always do. And I don't really know which Coug way back when did something that offended you, and I really don't care about that either. But you can live your little meager life in your little hole and write nasty things and if that makes you feel even, you go right ahead."

The WSAB and ADN said the exchange didn't go unnoticed. This week, a letter was sent to WSU President Kirk Schulz and Athletic Director Pat Chun expressing their concern, saying accredited journalists should be able to perform their job in an environment free of hostility or personal attacks.

"While Mr. Leach's offbeat and unusual behavior while interacting with the media is often viewed as humorous, the WSAB and ADN feel that his behavior following the Apple Cup crossed the line when he publicly singled out and attacked - or perhaps more accurately - bullied a member of the media," the letter to Schulz and Chun read.

The media organizations have requested that Leach issue a public apology to Blanchette.

Leach originally holds press conferences on Mondays, but will not this week as the Cougars do not have a game this upcoming weekend.

KHQ has reached out to Washington State University regading the situation, and is awaiting a response or statement from administration.

Blanchette wrote a column about the game as planned, saying Washington is "happy to let Mike Leach keep getting in Washington State's way at the Apple Cup." in the headline.

The WSAB represents over 260 radio and television stations across the state while the AND represents various newspapers across Washington.

Read the full letter from the WSAB and ADN here: 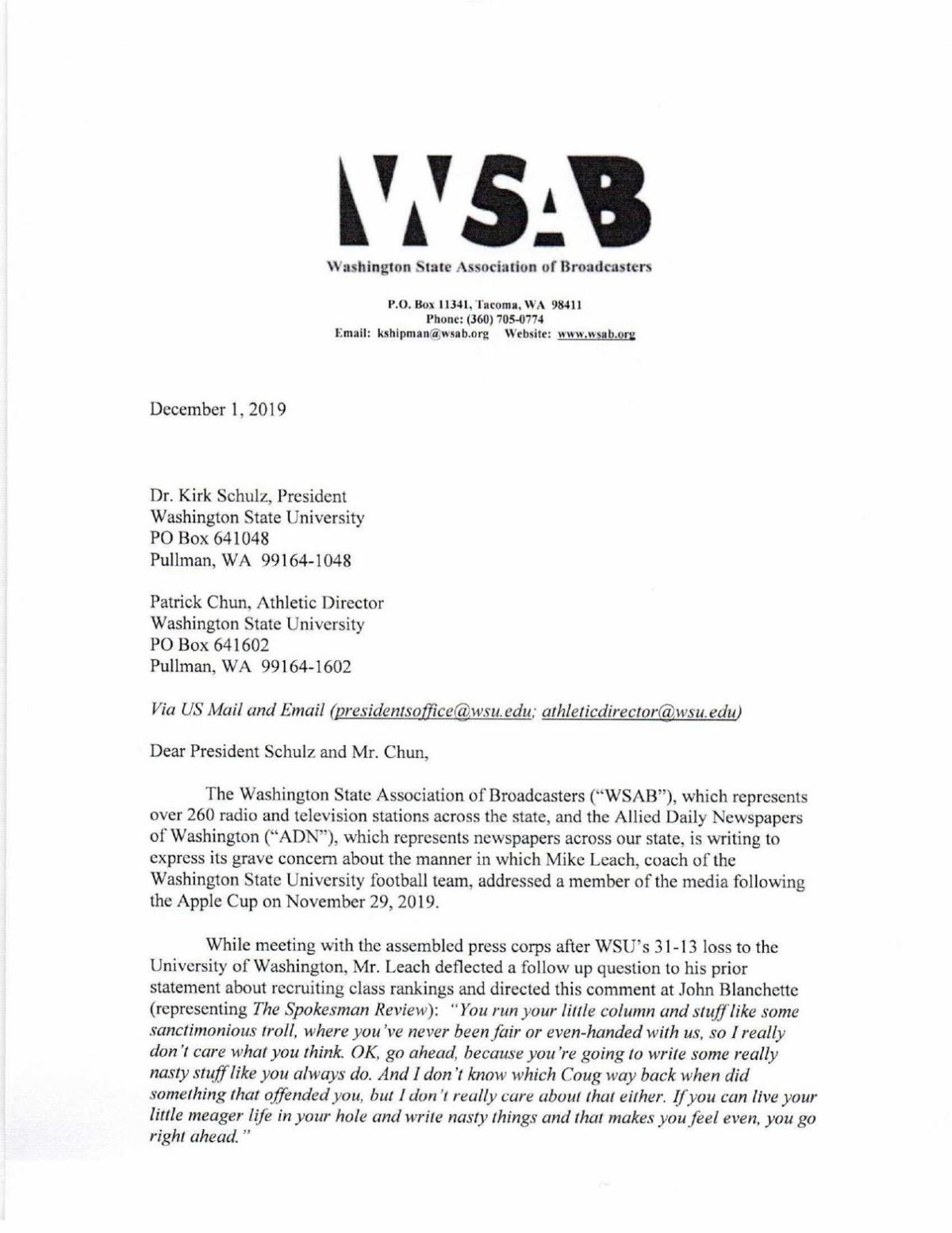 Patients being treated for the coronavirus in Spokane

All four Coronavirus patients now in Spokane, being treated at Providence Sacred Heart

Why Providence Sacred Heart was chosen to treat Coronavirus patients