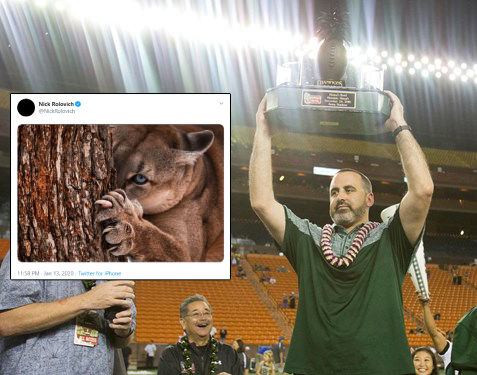 Courtesy University of Hawaii at Manoa

Rolovich updated his Twitter bio to "Head Football Coach, Washington State University" while also tweeting a photo of a Cougar grasping and peering around a tree, a hint at his signing that hasn't been announced by WSU yet.

University of Hawaii Athletic Director, David Matlin, said "Nick called me tonight to inform me that he accepted the Washington State job. Out football program is in a better place today because of Nick and we wish him all the best."

"We are excited to welcome Nick Rolovich to Cougar Nation," said WSU President Kirk Schulz. "Nick is a proven winner who will bring an exciting style of football to WSU. We look forward to building on the momentum of recent seasons."

"We set a goal of bringing the best coach possible to Washington State University," said Chun. "Nick Rolovich is a genuine person, a program builder, an innovator and the exact fit to lead Cougar Football. Coach Rolovich is committed to academic achievement and developing every aspect of our student-athletes. He has a vision of taking Cougar Football on a path to win championships.  We are fortunate to have Nick lead our program and we welcome his wife Analea, along with their daughter Alana and sons Daniel, William and Patrick to the Cougar Family."

Rolovich, who agreed in principle to a five-year contract, will be introduced at a press conference Thursday, Jan. 16 at 2:30 p.m. in the Rankich Club Room at Martin Stadium.

Rolovich has coached at Hawaii since 2008 as an assistant, eventually working his way to offensive coordinator in 2010. He took over as head coach in 2016 and has been at the helm of the Rainbow Warriors for four seasons.

Last year, he led the team to a 10 and 5 record, their first double-digit win season in nearly a decade. They also made the Mountain West Championship game for the first time in program history. To end the year, the Rainbow Warriors beat BYU in the Hawaii bowl.

BREAKING Hawaii’s Nick Rolovich is expected to become the new head coach at #WAZZU, per sources.

The future is here!