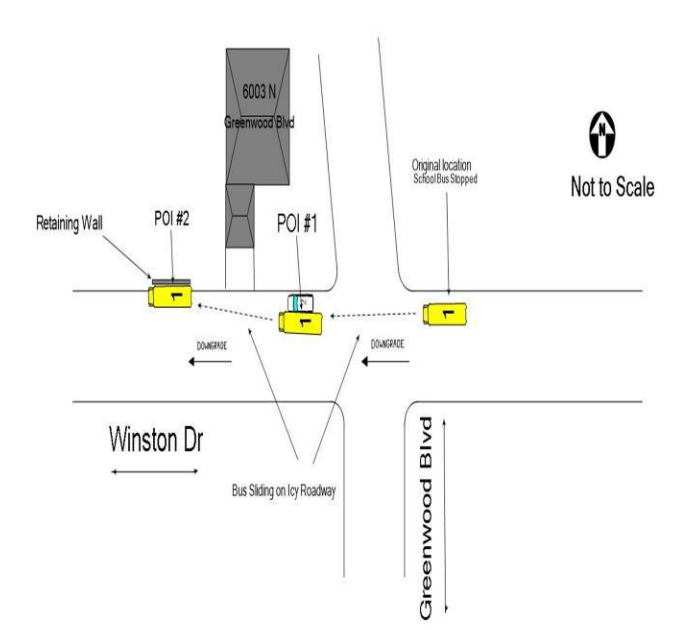 It's a story that sounds so crazy, it's almost hard to believe... but witnesses are adamant: students were told to exit a school bus, as it slowly slid down a sloped street in North Spokane.

However, a spokesperson from Durham School Services said the initial story was not true. When asked for clarification, an explanation, or any additional context, the company did not respond and said it would provide additional details at a future time. (The first call to Durham School Services was made on Monday. The most recent was made Wednesday.)

According to multiple witnesses (including students, parents, residents, and some involved in the actual incident), the school bus reached the end of its route, and the few remaining students began getting out of the bus. While the students were exiting, the bus began to slide. According to a student on the bus, the bus driver told students to "go" and continue exiting the bus. All the students hopped out of the bus as it slowly slid, then the bus hit a parked United States Postal Service van.

"While it was still moving, she (bus driver) made us jump out like 'Mission Impossible," a student on the bus said.

Several witnesses believe the students should've stayed on the bus, instead of continuing to exit. Safety and travel experts echo similar views.

"Through compartmentalization, children are protected from crashes by strong, closely-spaced seats that have energy-absorbing seat backs," the National Highway Traffic Safety Administration states. "Large school buses are heavier and distribute crash forces differently than passenger cars and light trucks do. Because of these differences, bus passengers experience much less crash force than those in passenger cars, light trucks, and vans."

"When the school bus arrives, your child should wait until the bus comes to a complete stop," the agency also states. "The greatest risk to your child is not riding a bus, but approaching or leaving one."

There is no mention of any students in the official report by the Spokane Police Department, which only details the collision itself.

A separate police report details an incident that occurred an hour after the incident, where a police car responding to the scene attempted to park behind the bus, then slid into the back of it.

"Vehicle 1 (police car) attempted to park behind Vehicle 2 (school bus), but slid on the ice into the back of Vehicle 2," the report states.