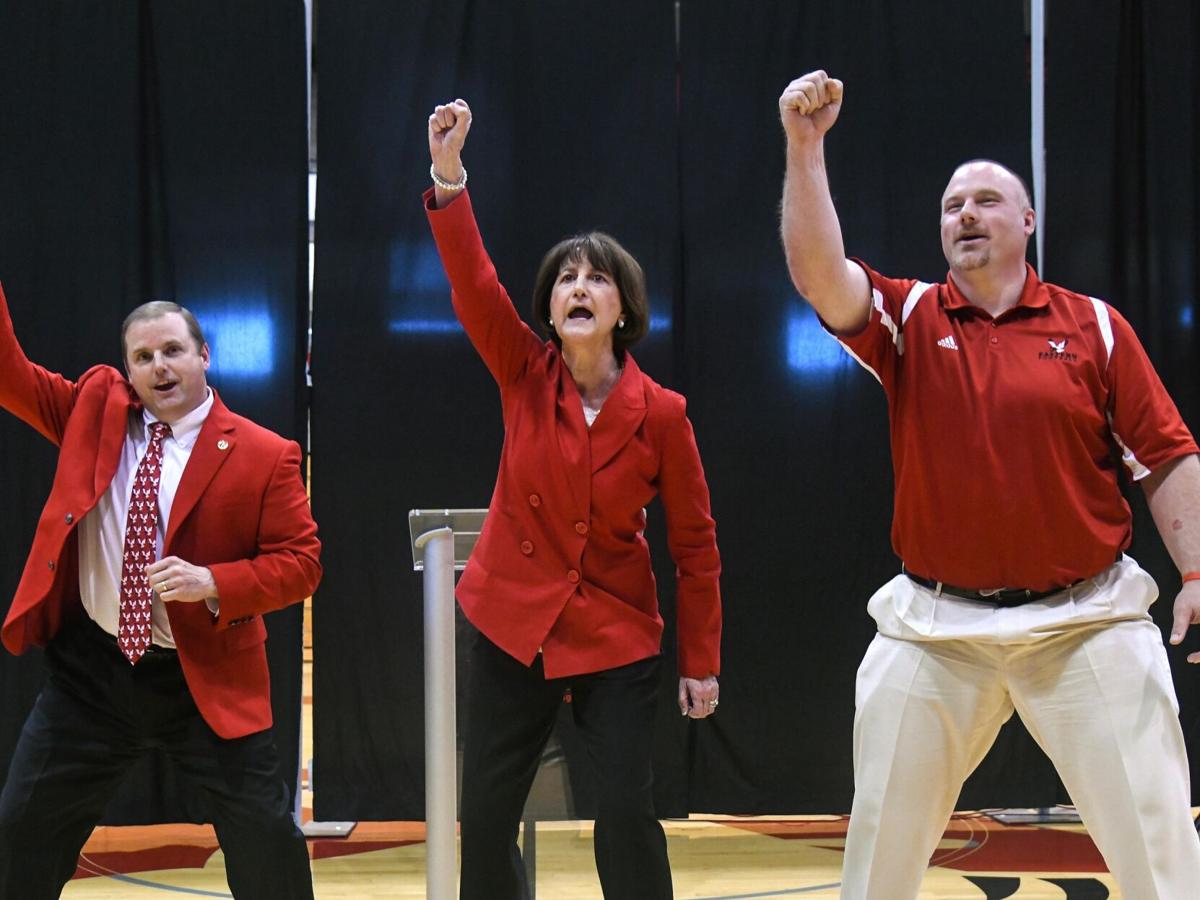 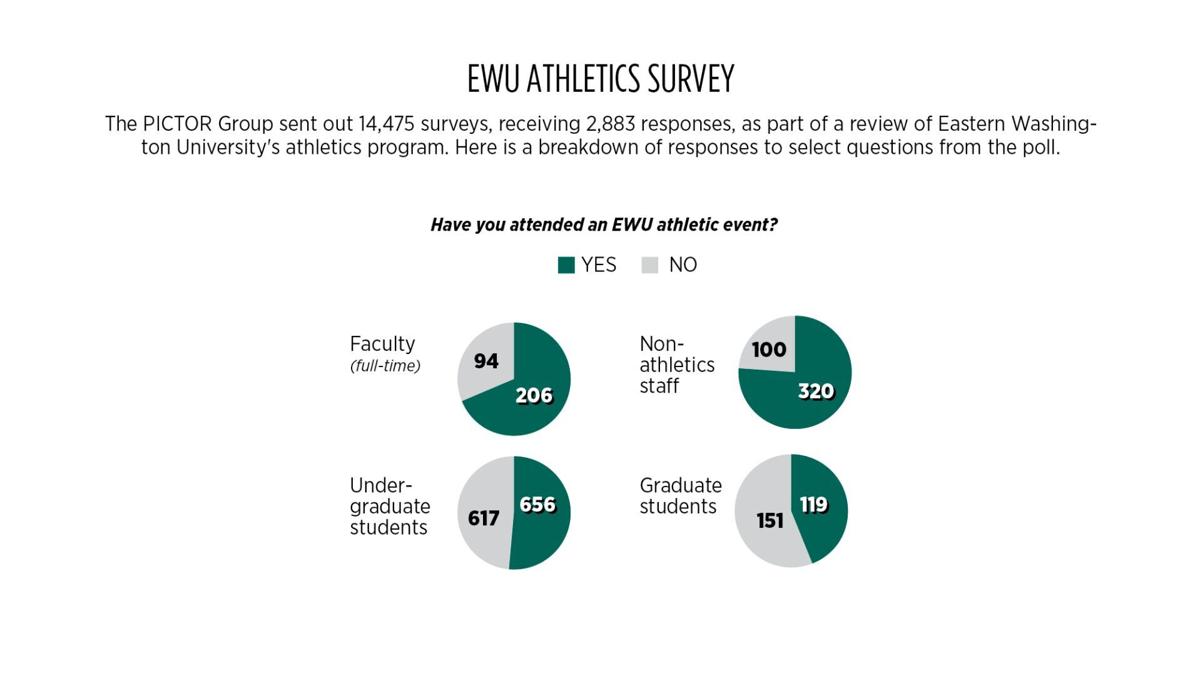 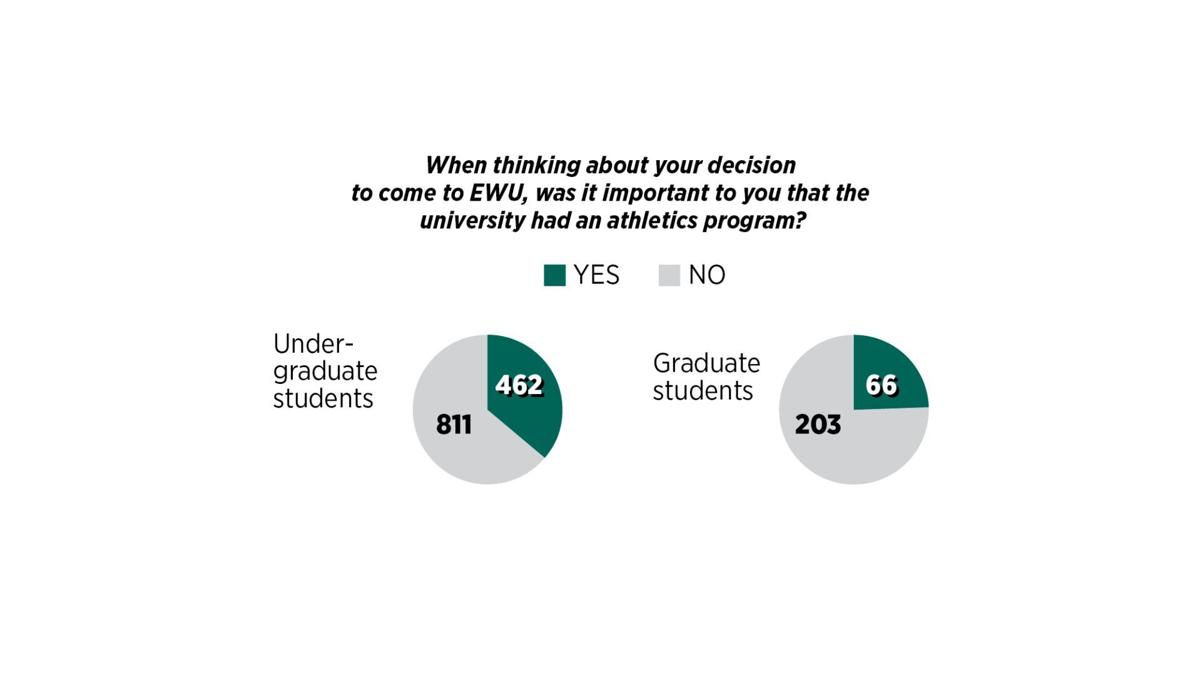 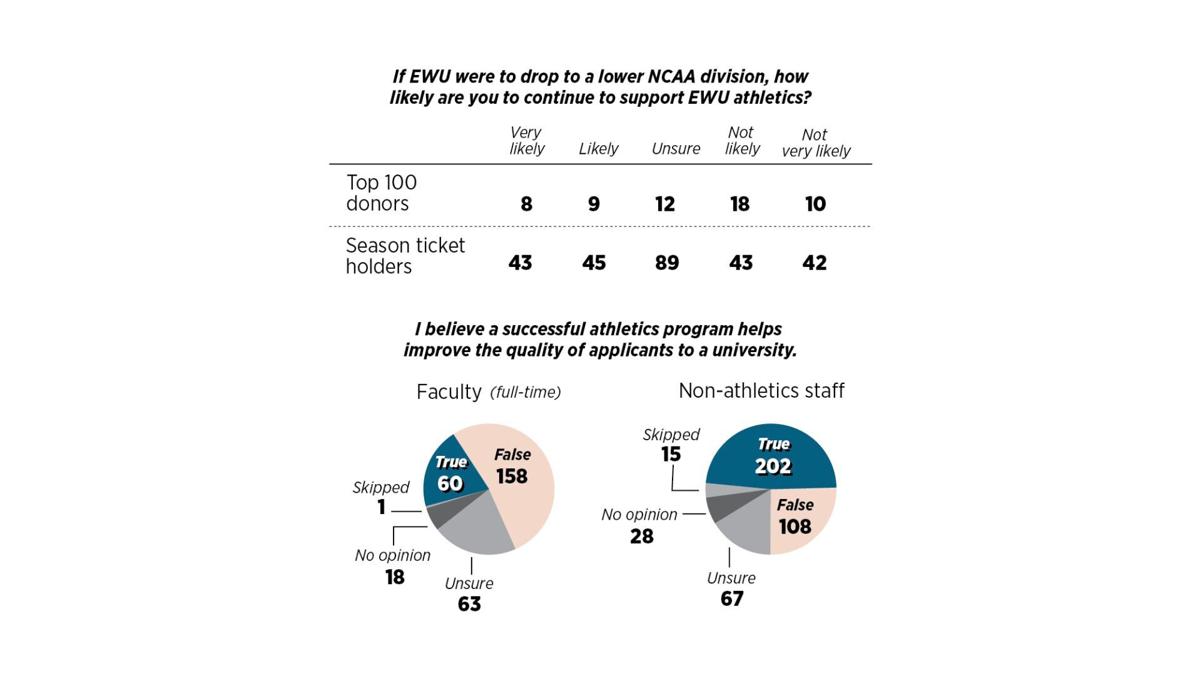 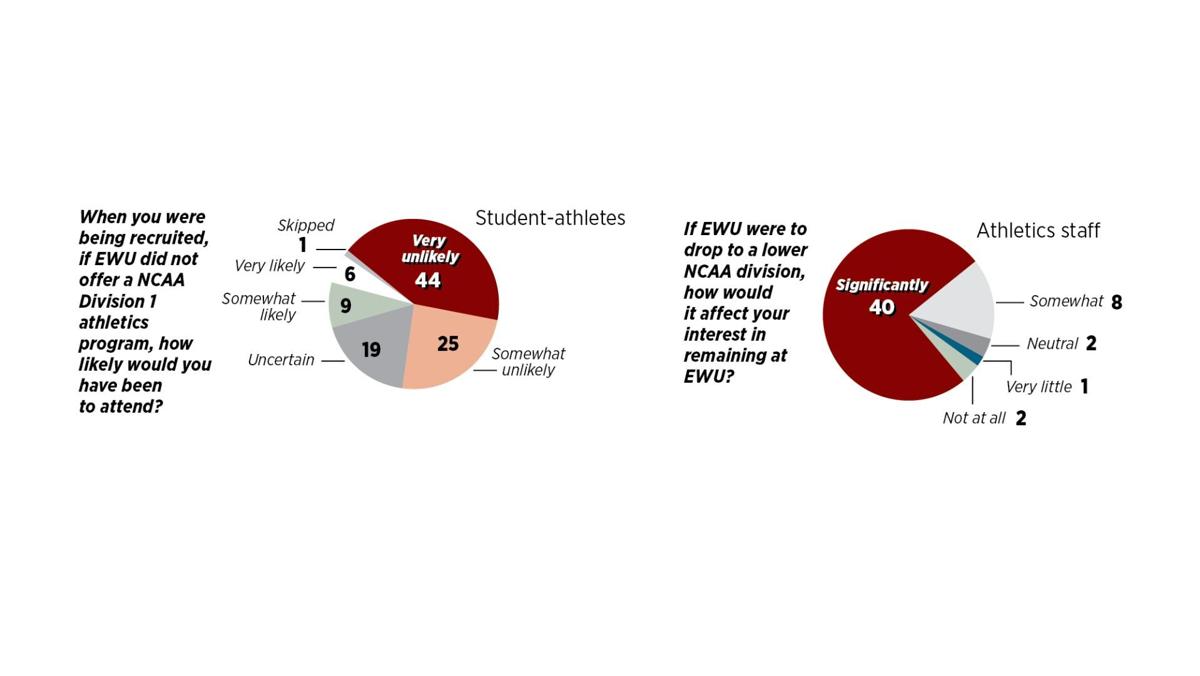 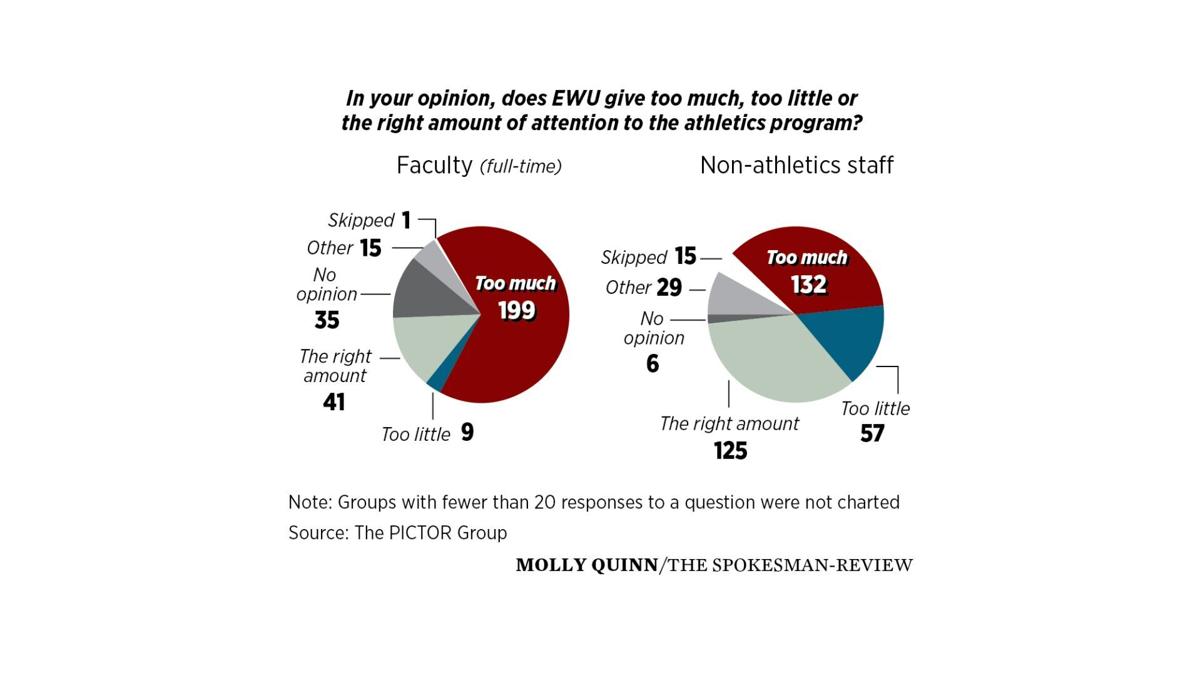 The future of Eastern Washington University’s athletics department will not be decided by Director of Athletics Lynn Hickey.

EWU’s Board of Trustees, with a recommendation from Interim President David May, is expected to make a decision around June concerning an athletics department that has incurred significant financial losses over the past several years. Public input, as well as a commissioned study presented to trustees in February by Nevada-based consulting firm The PICTOR Group, has guided this re-evaluation.

Hickey said she made a point to remove herself from The PICTOR Group’s study to ensure objectivity.

Below is a Q&A with Hickey. The interview has been edited for length and clarity.

Looking beyond the dollars and cents, what value does athletics bring to the university itself?

When I was still in San Antonio and getting ready to move here, people would say, “Where are you going?” And I said, “Eastern Washington.” “Oh! They have the red field!” That’s in San Antonio, Texas.

I think the value is visibility, but with what I’m involved in even more so are these almost 350 kids that we’re working with directly and the impact that this opportunity has on their lives, and what they’re taking out to their communities as an Eastern grad. I think we have a huge responsibility to make sure we’re running our program so that it meets the mission of the university.

I think one of the biggest competitions we have in front of us right now is making sure the investment in athletics and the mission of the university work hand in hand, because we have a great opportunity and responsibility to do three primary things: We should be very affordable entertainment for our campus, for our alumni, for the general community as a whole; we are the group that has the opportunity to really establish pride and traditions for the university; and then the third , we have an opportunity and responsibility to increase the equity of every graduate’s degree here.

If our basketball team’s in the NCAA Tournament and you go into downtown Spokane, our value, our visibility – your value, your visibility as an alum – goes up, and I don’t care if you graduated 20, 25 years ago. It’s how our world works. It’s our culture in that athletic performance, and that engagement to support your school, just really means a lot to people. In understanding that, and we can be utilized as an asset, we are not a threat. We have a tremendous opportunity to be a major asset to the university as a whole.

You said you have an opportunity to be an affordable entertainment option. Affordable how?

For just the pricing of the games just so that you can get in, we’re an affordable ticket, and it’s high-level entertainment. Our football games here – watching Eric (Barriere) get over 400 yards of offense, the team altogether had over 600 yards, it is a great game. To watch Tanner Groves, a Spokane kid, play basketball. He goes hard. It’s fun athletics.

So what’s the value of competing in Division I compared to a lower NCAA division or the NAIA? Is there lost value in competing in lower divisions?

I think it’s a combination of things. No. 1, you’re going to get a higher caliber of athlete. In no way do I want to be harmful to those other levels of play, but the kids that are the best at what they do want to play at the top level. I think there’s a perception in people’s minds, too, that we’re going to a DI game. It’s kind of like going to Major League Baseball versus Minor League Baseball. The draw is different.

All those opportunities and that ability to having maybe those bragging rights and to feel like you’re really at a high level of competition would be lost. Think of the Division II, Division III schools in the state of Washington. NAIA. Can you recite who they play? Probably not. But the year that Eastern upsets Washington State or plays close to Washington or whatever, yeah. The value of that for the university and the draw for your fans is much greater with those opportunities.

That said, is the price of playing and staying in Division I something that Eastern should be willing to bear?

That’s why we’re doing the study. It’s never easy to go through a public review of something that you love and work very hard at, but it was the right thing to do and it was done well. The decision from the information that will be gathered by our president, his decision that he takes to the board, and I have great trust that they’re going to look at everything to move forward.

You’ve got to be careful about saying, “Well, we’ll do this if we can afford it.” Well, maybe it’s more important to say this is really important to the mission of our university, to campus life, to making ourselves different in our state. We’re the only public institution in the state of Washington that offers FCS football. If you can’t go to Washington State or Washington and you want to play Division I football, you’re going to have to leave the state of Washington.

I think what is amazing about our program, and sometimes it can get frustrating, is how much we have done with so little.

I’ve heard that before regarding EWU athletics. What’s meant by “so little”?

The basketball court that we play on is the original basketball floor that was in that building, so I think it’s 40-plus years old. Our football locker room hasn’t changed since the ’80s.

When you look at dollar for dollar what’s invested in this program and what has been produced here, it is just absolutely amazing. I think what’s really interesting is, when I talk to my peers in the world, they think that Eastern has everything because of how well we show up nationally, how well we compete. They’re probably a little bit shocked when they come over here. I don’t have an administrative assistant. I answer my own phone.

So how well our staff works and sacrifices to give these kids an opportunity and how well our kids compete because they want to be here and represent Eastern Washington without all the “stuff” is absolutely amazing.

Would you say football is Eastern’s most prolific sport?

Yes. We don’t have a basketball arena that has enough seats in it. Even if we sold every ticket, we could not produce the revenue that we need to support the program. Part of that is just a numbers piece.

With football this year, we’re going to play the same schedule next year. We were supposed to play Montana, Montana State, Weber State, Idaho – everybody is coming to our place this fall, and so we are projecting a $1 million ticket sale.

Basketball is extremely important to us, but right now, we don’t have a facility large enough to even sell enough tickets to bring in that level of income. With football, one game – the University of Florida game was $750,000 guaranteed.

What we need to work so hard on basketball to keep it where it is and move it forward is the potential for the (NCAA Tournament).

If we can continue to build a program like what Shantay has done, we know that every year we’re a contender and maybe have a chance to get into the Big Dance and produce that revenue.

The PICTOR Group options did include a “hybrid” approach to remaining in Division I, in bolstering funding to keystone athletic programs at the sake of others.

I think our difficulty is two things: No. 1, we don’t have a lot of money invested in those programs even now, so there would be some savings, but I don’t know if it’s at the point it’d really be a problem-solver. The other thing is we’re very, very cognizant of Title IX. And if we made a commitment to a lot of kids, I really don’t want to pull the rug out from under them.

This last budget cut, we had to cut a lot of our budget, so what we had a decision on was trying to protect our scholarships. We cut operations; it ended up being about 32%, and then everyone took a salary reduction. We did not cut one scholarship because we want to protect the kids. Whether we can continue to do that or not, that will be part of this decision. We have the minimum number of sports in place to be Division I and we have an obligation to the conference to sponsor what they call “core sports.” There are certain sports you have to sponsor to be a part of the Big Sky (Conference).

The other decision you’ve got to make is, we really don’t want to do this halfway. We don’t want to say we’re Division I and then not give anybody an opportunity to really compete because then, even if you’re Division I, you’ll start losing value because you can’t win. People want to be with winners. The more you win, the more tickets you sell, the more engagement you can have with potential donors.

You got to be careful that in your financial plan, you’re looking at what your mission is, your purpose, and not just always what’s the dollar amount, because you’re going to end up shooting yourself in the foot. If you try to diminish things too much, you have created another problem.

In your mind, could Eastern feasibly stand to drop football?

Once again, that’s not my decision.

As the athletics director and the executive on this campus that has the responsibility of getting a financial plan together, it would be very harmful. It would be very difficult. But, that’s not my decision. That’s for our president and board of trustees to make that decision. We have a great history. We have some wonderful alumni.

To destroy that tradition and history would be very hurtful.

Father uses EWU game to build memories with his sons

What to know BEFORE filling out your tournament bracket

WATCH: EWU Football gets ready for their next game against Idaho State | Interview with Head Coach Aaron Best