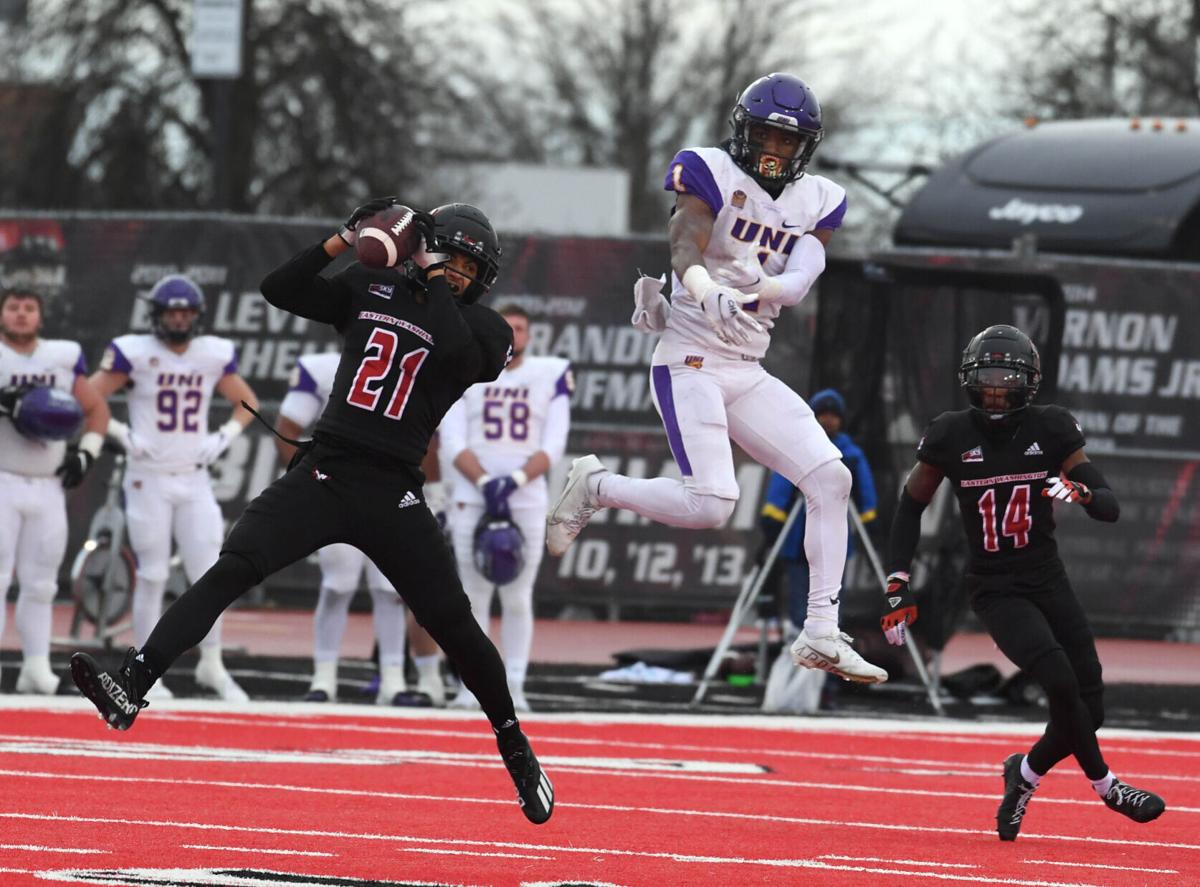 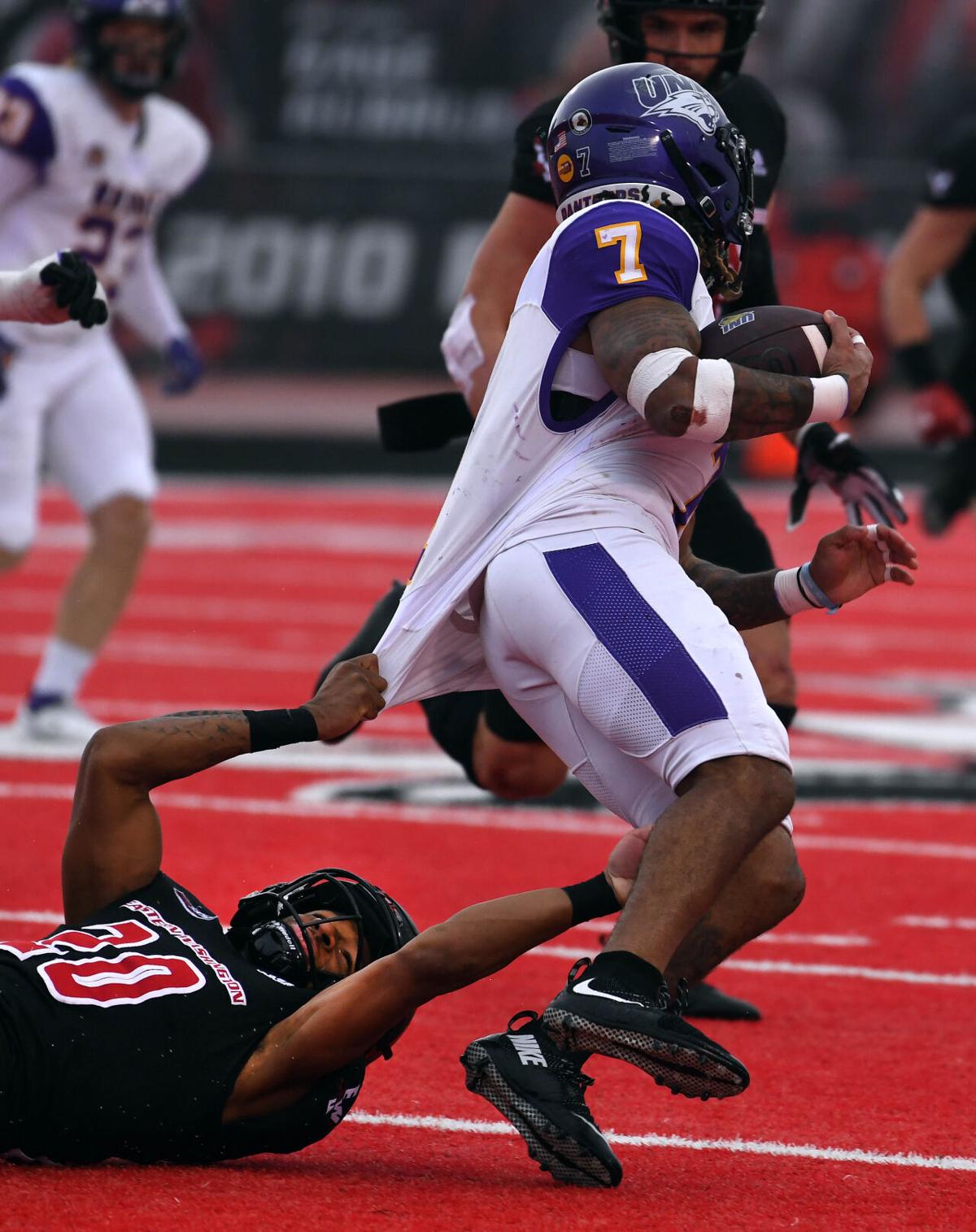 Northern Iowa’s offense was nine plays into its first drive of the game on Saturday and already had achieved first downs in a manner that could have broken the collective will of the Eastern Washington defense.

First, there was a third-and-6 at UNI’s 9-yard-line: Calin Criner was flagged for pass interference. First down.

Then, UNI faced a third-and-11 at UNI’s 16-yard line. Theo Day completed a 59-yard pass to Isaiah Weston. First down.

Finally, the Panthers lined up for a third-and-16 at the EWU 31-yard line, and Day completed a 30-yard pass to Sam Schnee. First down.

But at that point, there was just as much pressure on the Panthers to score as there was on the Eagles to hold, at least in Mitchell Johnson’s estimation. So the Eagles settled in for what they hoped would be a goal-line stand.

That’s precisely what they got, and it set the tone for what proved to be the latest strong defensive showing by Eastern Washington in its 19-9 first-round playoff victory.

“We held them there for four plays,” said Johnson, the Eagles’ junior defensive end. “It just shows the maturity (of our) defense.”

That victory set up a rematch with the Montana Grizzlies in the round of 16 of the Football Championship Subdivision playoffs on Friday night in Missoula.

In the Eagles’ final game of the spring season, there were no such goal-line stands. In their 42-20 playoff loss at North Dakota State, they gave up 422 rushing yards and allowed the Bison to convert on 8 of 10 third downs.

They finished the seven-game spring season with a defensive third-down conversion rate of 40.8%, right about the same as it was during the full 2019 season (40.5%).

This year, though, the Eagles have improved markedly in both categories. Through 12 games, Eastern’s opponents have converted on 31.2% of their third downs, and the Eagles’ defense has shaved 38 yards off its per-game rushing allowance from last season.

When asked about run defense before the season began, Eagles coach Aaron Best said he challenged the defense to tackle better. By doing that, he said, the defense could improve in various aspects, not just in stopping the run.

Apparently, that has happened.

“I feel like as a defense we’ve practiced tackling day in, day out,” defensive end Debore’ae McClain said Tuesday. “The biggest thing was to practice it, then play and do it, and bring that to every game.”

But there are other reasons for the team’s defensive improvement. More experience is one.

Six of the team’s regular front-seven starters this year all started or played significant time last spring, and many of them have been with the team for at least four years. Johnson, for example, is a fifth-year player. He joked that Jack Sendelbach, a seventh-year senior linebacker who is second on the team in tackles, must be 40 years old by now.

“We have a lot of guys with different experience, and at the end of the day, (experience) jells really well as a team,” Johnson said. “It’s easy to communicate with one another because we’ve played so many games together.”

While defensive ends Johnson and McClain are more experienced – both are fifth-year juniors, and this season have a combined 9.5 sacks – the interior linemen have been particularly stout, teammates said.

At the core has been sophomore Josh Jerome, who leads the Eagles with 6.5 sacks and had a key fourth-down hurry on that goal-line stand against UNI, as well as Caleb Davis, who had four tackles against the Panthers.

“I think a lot of it is we found out what we do well, and we’re just a resilient team, especially those guys up front,” said Criner, whose 31 starts lead the EWU defense. “Like Josh Jerome, Caleb Davis, those guys are just savages.”

Davis, sidelined by an injury last spring after starting two games in 2019, is part of a rotation inside that is deeper than it was seven months ago. Redshirt freshmen Matthew Brown and Jacob Newsom play regularly and have a combined 30 tackles between them.

Jerome is fourth on the team with 56 tackles, 17 of which have been for a loss of yardage. He earned third-team all-conference recognition this year.

“I think it’s just more experience,” Johnson said of the team’s improvement up front. “A lot of those D-tackles are making a ton of plays right now. … It’s just more (that) you’re seeing guys grow up and play more mature football.”

On Friday in Missoula, the Eagles will face a rushing game that ranks eighth among Big Sky teams with 129.3 yards per game, though the Grizzlies had one of their best rushing performances of the year in their 34-28 loss at Eastern when they ran for 187 yards on 39 carries.

The Grizzlies had just one goal-to-go situation in that game, a first down at the Eastern 3-yard line. Xavier Harris scored on the first play, a 3-yard run over the left end. That, too, came at the end of a 13-play drive.

Still, that was nearly two months ago, and the Eagles are riding high from a defensive effort last week when they held Northern Iowa’s offense to just 2 of 15 in third-down conversions. That included a pair of goal-line stands.

In Eastern’s past four games, its opponents have scored on 7 of 14 red-zone visits, compared to 27 of 31 in the first eight games.

“I feel like as a group we’ve always felt like we play really well together and play as a whole,” McClain said. “I think the biggest thing was our red-zone (defense), and making sure that those numbers are where they need to be and where we want them to be.”

That is one aspect of the game at which the Eagles have played better of late, and while Criner said the team did take a certain level of confidence from beating the Grizzlies in Cheney earlier this season, that was a while ago now. The playoffs, he said, are different.

“This is the playoffs. This is a whole new animal,” Criner said. “This one will be the true test of who has progressed throughout the season and who is going to show up on Friday.”