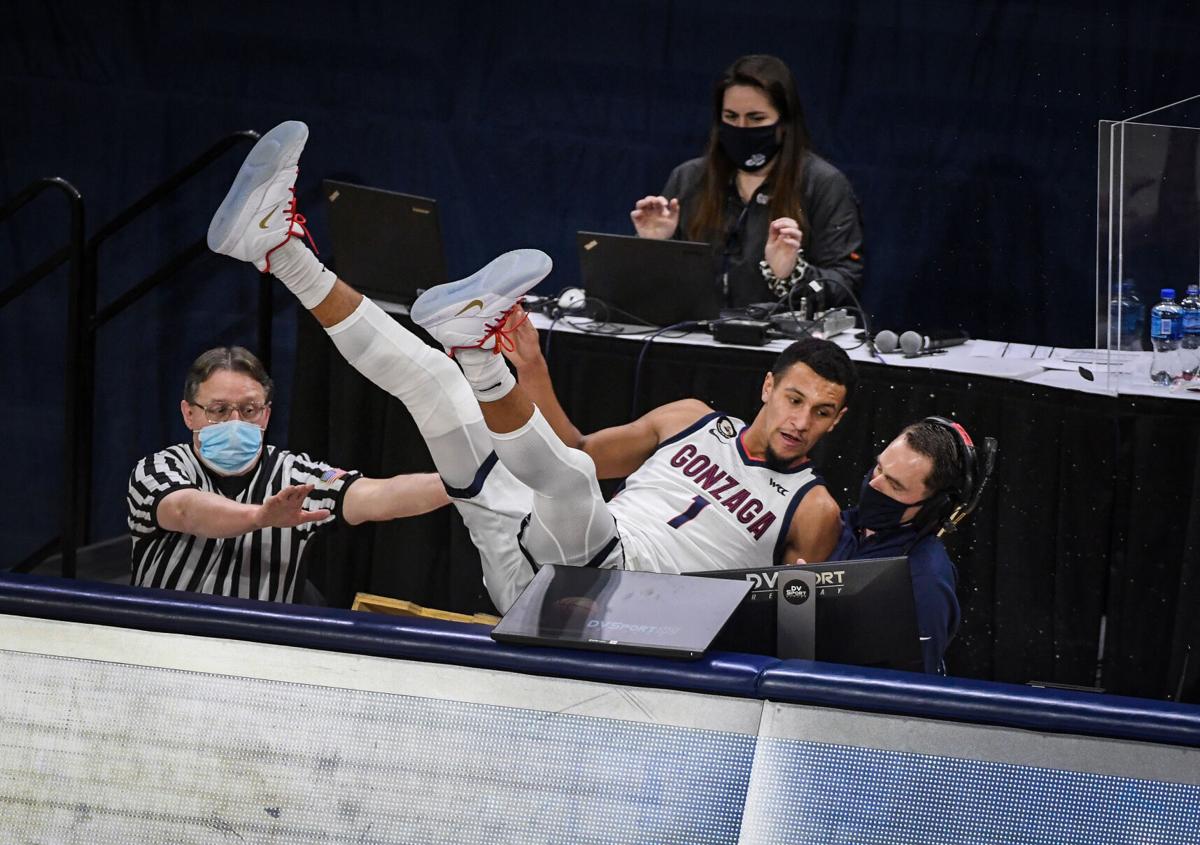 Gonzaga guard Jalen Suggs lands on the scorer’s table after saving a ball from going out of bounds on Jan. 2 against San Francisco at the McCarthey Athletic Center. The Bulldogs won 85-62. 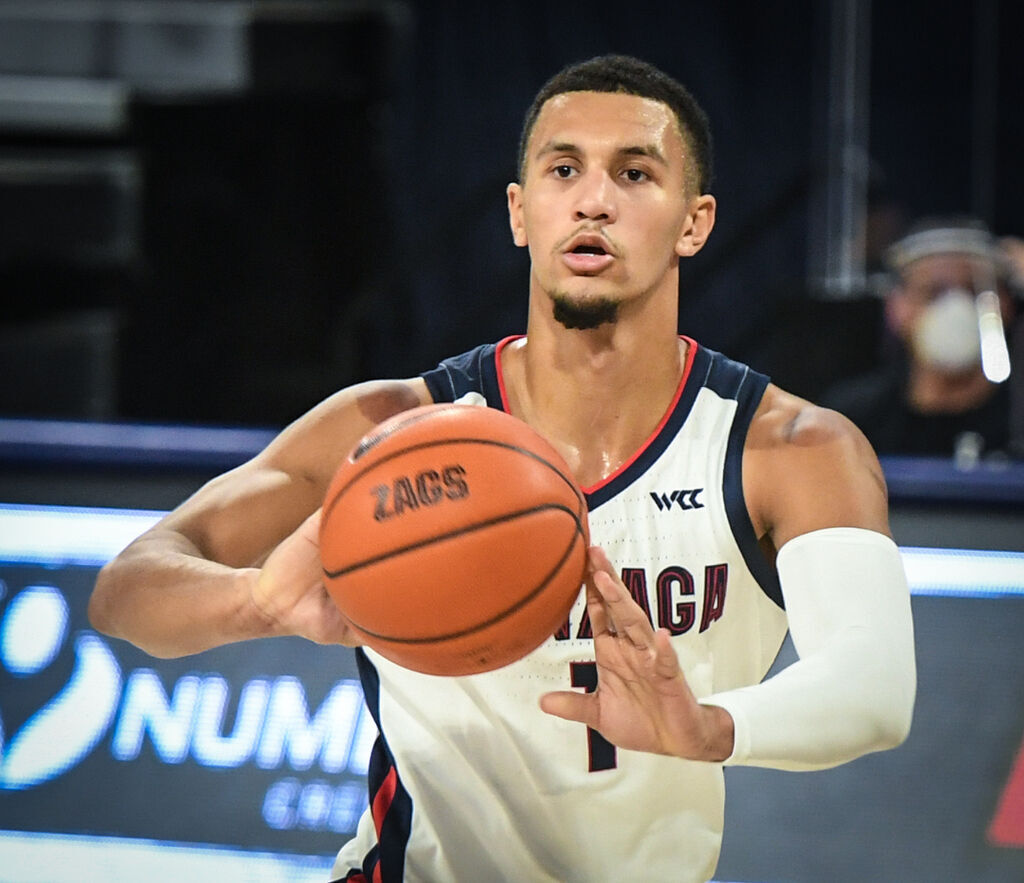 Gonzaga guard Jalen Suggs lands on the scorer’s table after saving a ball from going out of bounds on Jan. 2 against San Francisco at the McCarthey Athletic Center. The Bulldogs won 85-62.

The most obvious instances have been two jaw-dropping passes – a sidearm bullet that traveled nearly the length of the court to Joel Ayayi and a 65-foot bounce pass with sidespin that hit Dominick Harris in stride. Suggs also shook off what appeared to be a serious ankle injury and returned to help the Zags defeat West Virginia.

“Coach (Mark Few) never fails to bring it up in every practice, whether I choke down on a big or something like that,” Suggs said. “He says, ‘Hey football guy, this is your one chance to hit somebody again.’ “

Suggs picked basketball and Gonzaga, becoming the program’s highest-rated recruit, but it’s a safe guess that he tuned in Monday as Alabama thumped Ohio State to win college football’s national championship. After all, both schools showed recruiting interest in the two-sport prep star from West St. Paul, Minnesota.

The 6-foot-4, 200-pound Suggs, a quarterback and safety at Minnehaha Academy, still tosses the football around on occasion. He joined Gonzaga teammates for a 7-on-7 session this summer with Suggs at QB for one team and senior wing Corey Kispert at the helm for the other.

The two have something in common: Kispert played quarterback at King’s High before deciding to concentrate on basketball. His grandfather, Dainard Paulson, played in the NFL in the 1960s.

Terrell Suggs, Jalen’s cousin, has two Super Bowl rings and was the NFL Defensive Player of the Year in 2011.

“Corey texted me and sent me a video back when he was in high school playing and they drove down the field and he threw that touchdown,” Suggs said. “We were obviously the two quarterbacks. It’s tough to say, but he did come out on top, showed me a lot of good things. I think that QB1 battle is definitely a close one. … Great guy, great teammate, love being around him, love learning from him.”

Suggs has made it look easy at times piloting GU’s offense.

He’s in the top 20 in seven West Coast Conference statistical categories. In the three games this season he hasn’t scored in double figures, he made a major impact with his passing, defending and rebounding.

“When he dialed it back a little bit (against BYU last Thursday) he was really special and spectacular,” Few said. “There were times when they sped him up, but the beauty of it is he’s showing the maturity and how good of a player he is, he takes that and understands it.

“He started going downhill on those ball screens and it’s on his pace. Trust me, that’s the worst thing a defense like that can see. He was hitting cutters, hitting guys out for 3s, finishing. What I see is a guy that continues to grow in his ball-screen possession and reads.”

“That’s one thing they’re doing a great job of helping me learn and develop,” Suggs said.

Suggs’ play has elevated his position on NBA mock drafts – he’s No. 4 in ESPN’s top 100 – and in rankings of college freshmen – he’s No. 4 on CBSsports.com’s Frosh Watch. Suggs was added last week to the Wooden Award midseason watch list, joining Kispert and another teammate, Drew Timme.

TV analysts have made comparisons between Suggs’ style of play and former NBA greats Jason Kidd and Chauncey Billups.

“My dad is a basketball junkie. We watched a ton of film together of guys from his era,” Suggs said. “We definitely watched a little Jason Kidd together, just the way he sees the floor, the way he passes. One thing a lot of people don’t understand is there’s an art to passing the ball.

“I’ve learned a couple things since I’ve been here from (GU legend John) Stockton and things like that, just where to pass the ball, getting up on the shoulder, different backspins to throw on bounce passes.”

Learned and displayed on the court.

WATCH: Gonzaga vs. NW State on SWX and KHQ