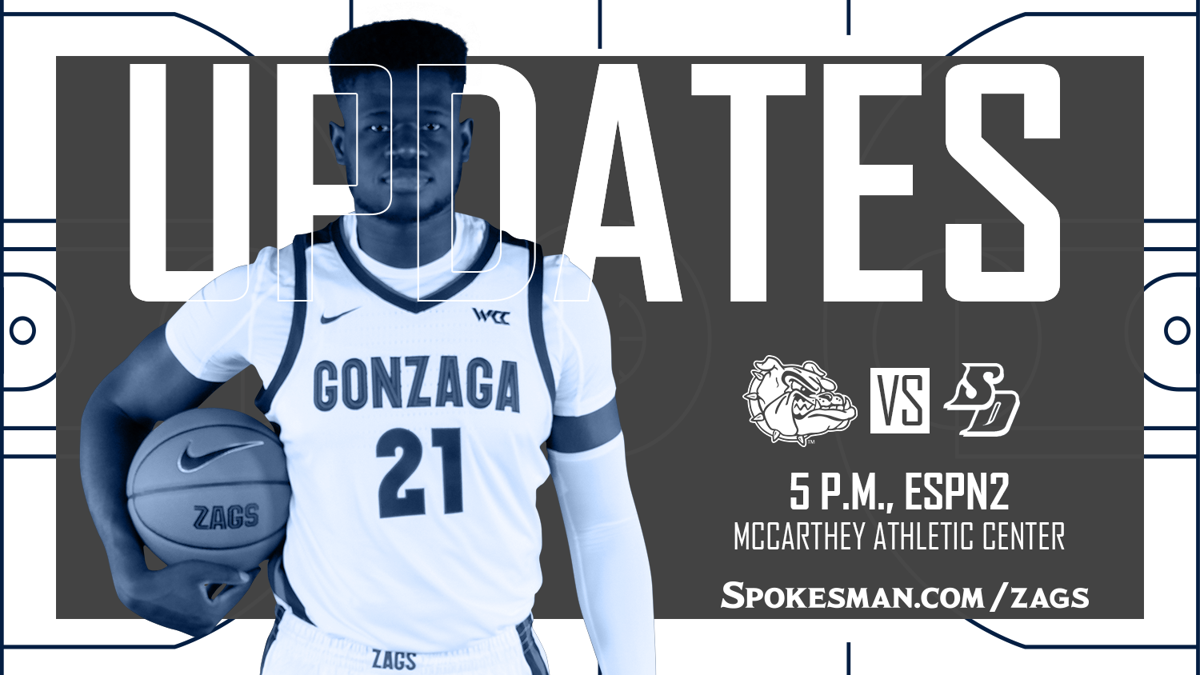 Drew Timme led four Gonzaga scorers in double figures as the No. 1 Bulldogs never trailed in a 106-69 win against San Diego on Saturday at McCarthey Athletic Center in Spokane.

Timme scored 21 points on 7-of-8 shooting. The sophomore center was 7 of 7 from the free-throw line and grabbed eight rebounds.

The Zags strolled to a six-point lead in the first eight minutes before stepping up the pace and going on a 12-0 run.

Gonzaga led 51-22 at halftime behind 17 points from Timme.

USD also turned the ball over 12 times in the first half. The Toreros finished with 18 turnovers.

Gonzaga next plays on Thursday when Santa Clara visits the Kennel. The game is scheduled for 4 p.m. PST.

Timme is 2-of-3 shooting as GU has looked to get the ball into its center.

Jalen Suggs has three rebounds for Gonzaga, but also has two turnovers. Both came on attempted passes to Timme.

Gonzaga has turned the ball over six times, but USD has only converted those into two points.

Corey Kispert has four points for Gonzaga. The Zags are 0 of 3 from beyond the arc.

Gonzaga scored 14 points off of 10 San Diego turnovers. The Zags have 11 fast-break points.

Gonzaga still hasn't made a 3-pointer.

San Diego is shooting 35% and has committed 10 turnovers. The Toreros have made just 1 of their last 7 shots and haven't scored over 2 minutes.

Gonzaga 51, USD 22: Drew Timme has 17 points and six rebounds and the No. 1 Bulldogs are routing the Toreros at halftime.

Corey Kispert and Jalen Suggs each have 11 points and five rebounds for Gonzaga.

Joey Calcaterra has eight points to lead San Diego, which is shooting 38.5% and has 12 turnovers.

The Zags strolled to a six-point lead in the first eight minutes before stepping up the pace and going on a 12-0 run.

Neither team has shot well from 3-point range. Gonzaga is 0 of 7 and USD is 2 of 9. Calcaterra has both makes.

Gonzaga made its first 3-pointer of the game when Andrew Nembhard made one from the corner.

7:45 – Gonzaga 86, USD 47: Aaron Cook might have the Zags' dunk of the year as he throws down a left-handed jam over a San Diego defender.

Gonzaga getting extended minutes for freshmen Dominick Harris and Julian Strawther. Strawther has three points and Harris has two.

Freshman Dominick Harris has eight points on 3-of-4 shooting.

WATCH: The United Soccer League takes steps to bring a franchise to Spokane