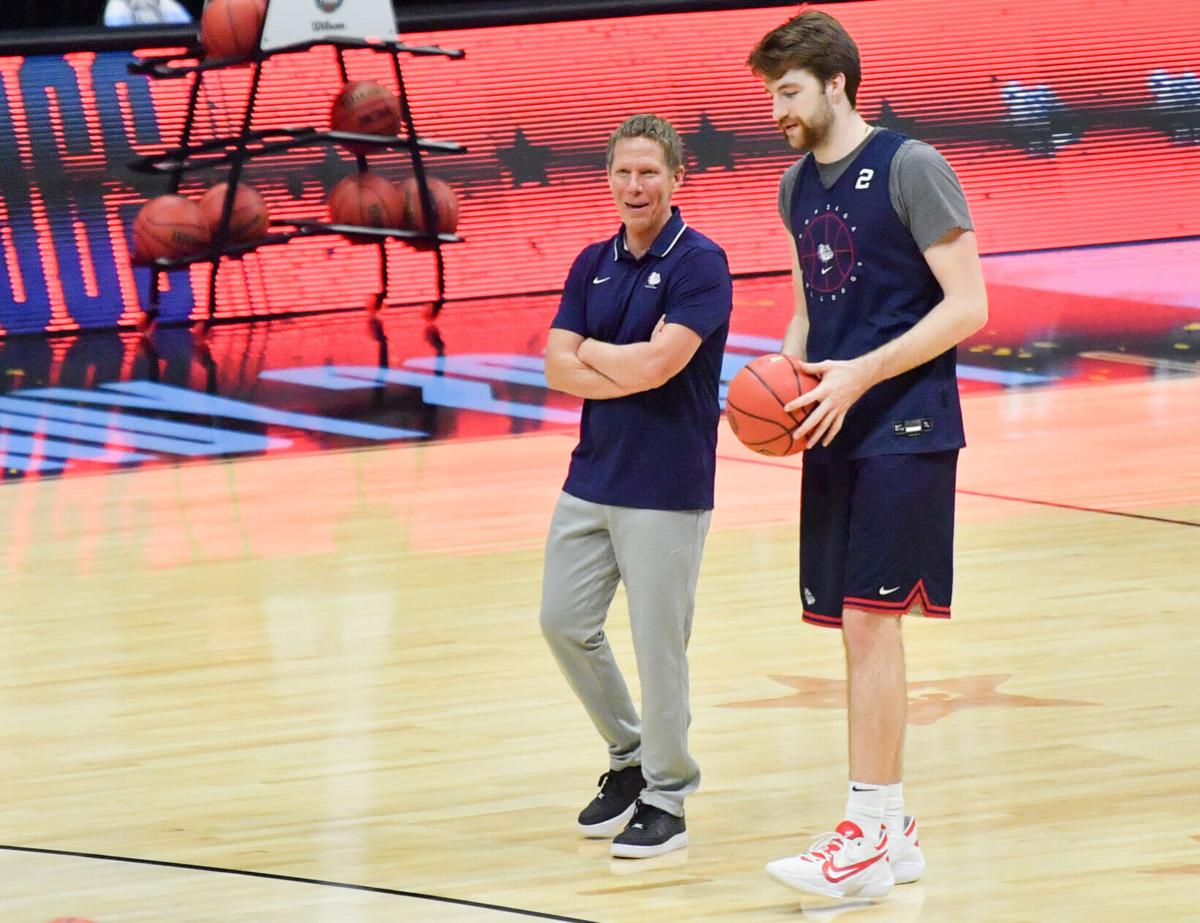 Gonzaga coach Mark Few laughs with forward Drew Timme during a practice session on April 2 ahead of GU’s Final Four game against UCLA in Indianapolis. 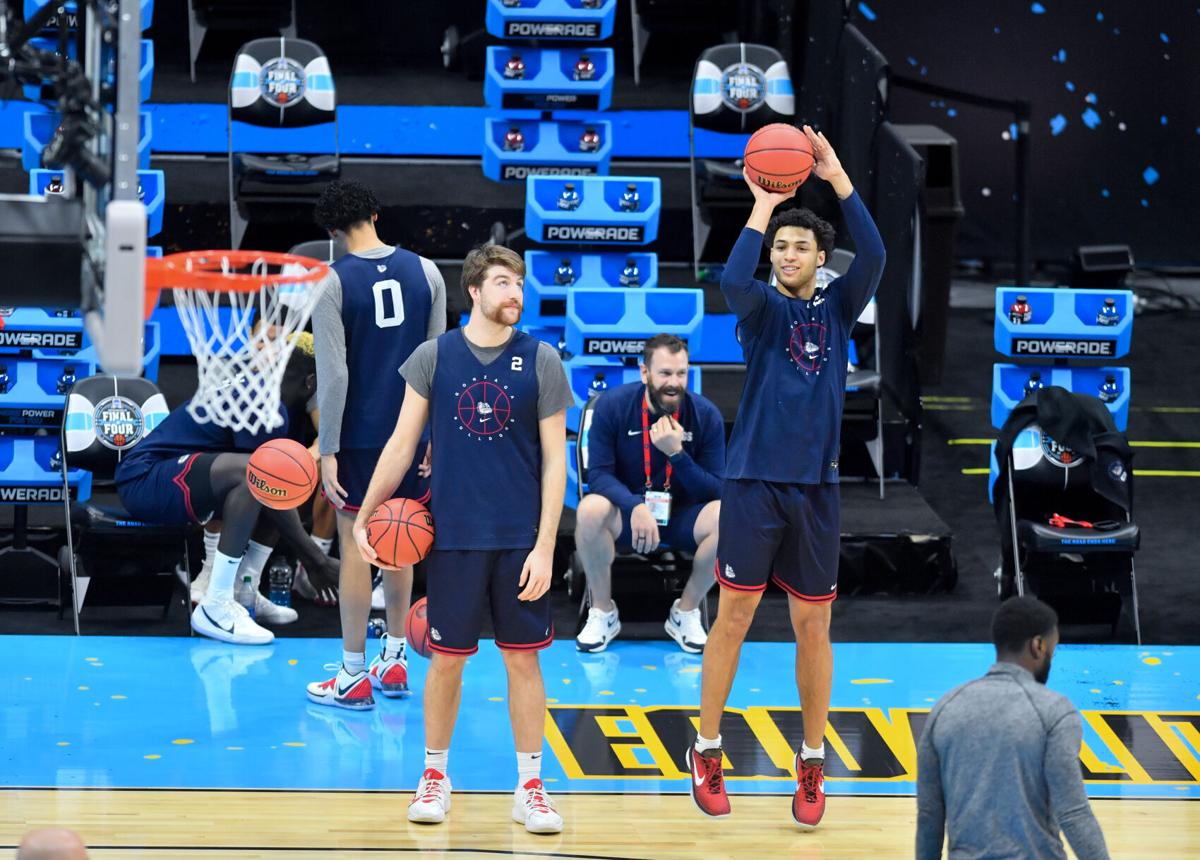 Gonzaga coach Mark Few laughs with forward Drew Timme during a practice session on April 2 ahead of GU’s Final Four game against UCLA in Indianapolis.

Parents want the best for their kids so consider Matt Timme happy because his son, Drew, is happy.

Drew announced recently he is putting professional options on hold to return to Gonzaga next season. It wasn’t a simple decision with appealing opportunities on both sides of the pro-college aisle.

“Drew had a tough choice to make,” Matt said in a phone interview. “He was in a no-lose situation either way. I think he’s happy. You only get to be a kid once, why not enjoy it?

“He really, truly enjoys the college life. There’s pressure, obviously, playing for the No. 1 team, or almost always No. 1, year in and year out, but he enjoys it. It’s a great program and great culture. I think that’s why you saw Corey (Kispert) come back, too, and improve his draft stock.”

Kispert provided Timme with an outline of sorts as the 6-foot-7 wing went from a projected second-round pick following his junior year to a possible lottery selection after a stellar senior season.

The 6-10 Timme wasn’t listed on most mock drafts, but he still could have tested the NBA waters and/or explored options overseas. Matt said they sought information from trusted sources to form an educated decision, but we “keep a tight circle, pretty tight internally to our family.”

“We were close (to declaring and going through the predraft process), but I don’t think it’s going to hurt him one way or the other if he did or didn’t,” said Matt, who played at Southern Methodist University. “He knows what he needs to work on and get better on. There are no secrets out there, it’s been discussed the whole past year.

“He’s working on athleticism, lateral quickness and his shooting. It’s not so much that he has to totally rework it (shooting), but just have the confidence, the confidence that comes from putting in the work.”

That’s where Tyler Relph comes in. He’s worked with the likes of Julius Randle, R.J. Hampton, Skylar Diggins-Smith, Willie Cauley-Stein and Nicolas Batum in the talent-laden Dallas-Fort Worth metroplex.

“I know he’ll never say it, but he’s probably one of the best trainers in the world,” Timme told a Dallas television station.

Timme has been working out at SandersFit in Dallas and training with Relph since returning to Texas in April. Relph has helped Timme since his high school days, but now it’s daily two-hour sessions.

“We had the conversation of, we don’t want to go away from what he’s great at. We want him to be elite at it,” Relph said. “We work on pick-and-pop and they have to cover it or it’s going to be a 3.

“He has an amazing feel for defenders as far as body and footwork and shot fakes. He has the whole arsenal. We’re trying to get the floor to expand for him. Hopefully, Gonzaga gets a better player.”

Relph estimated Timme has been putting up 250-300 NBA-range 3-pointers per day. Timme occasionally goes up against the 7-foot, 285-pound Cockburn, a potential second-round pick.

“We’ve added a couple things we think he can use against more aggressive, physical defenders if the things that he does well may not be working, different moves out of the post, midpost, to get shots or separation,” Relph said.

“Coach (Mark) Few and his staff do an amazing job with player development. I’m trying to give him some extra things and challenging him as a player, trying to push him to be that first-round pick he wants to be.”

The 6-8 Watson is spending a few weeks training with his good friend Timme. Watson started 17 of 32 games last season and averaged 6.9 points and 3.3 rebounds.

Watson (71.1%) and Timme (67.7%) ranked among the most accurate shooters inside the arc in the nation, but both have room for growth from distance. They combined to make just 9 of 41 on 3-pointers last season.

“The biggest thing with Anton is his range and his motor,” said Relph, who played one year at West Virginia and three at St. Bonaventure. “We’re trying to increase his motor and trying to get him to understand what it’s like to want to be and try to be a pro.

“If you want to play at the highest level, you better be a freak of nature or be a top 1% worker in the world. That’s how it is. It’s good for Anton to be around Drew, because Drew has that elite mentality and wants to be one of the top 1% in the world.”

Timme’s offseason workouts mirror his approach during the season – put in the work and enjoy the process.

“He’s not one of those guys you have to motivate to get better,” Relph said. “He wants to get better. He knows the areas he needs to get better at and he’s willing to work on them.

“Personality-wise, we’re both jokers, but when it’s time to get down to work, we work. As people in Spokane know, he’s one of the best kids in the world. He’s a special player and human.”

Relph has no doubt Timme will be in the NBA down the road.

“The skill set is there,” Relph said. “Obviously, he has stuff he needs to work on, but the things he does as far as being a teammate, communication, his IQ is extremely high. I think NBA teams will love that part about him.”

The Timme family is looking forward to another season following the Zags, who will be one of the national championship favorites. Matt and wife Megan attended most of the Gonzaga games last season that permitted fans during the COVID-19 pandemic.

The Zags won their first 31 games before falling to Baylor in the national championship. After win No. 31, an overtime thriller against UCLA, Matt cracked, “I needed to do recovery with the team, an ice bath.”

“Championship game aside, it was still a remarkable season to watch,” Matt said. “Megan and I couldn’t be prouder.”