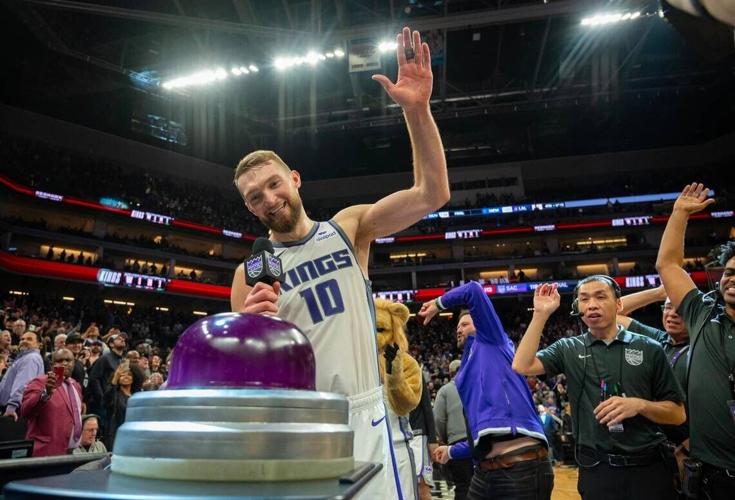 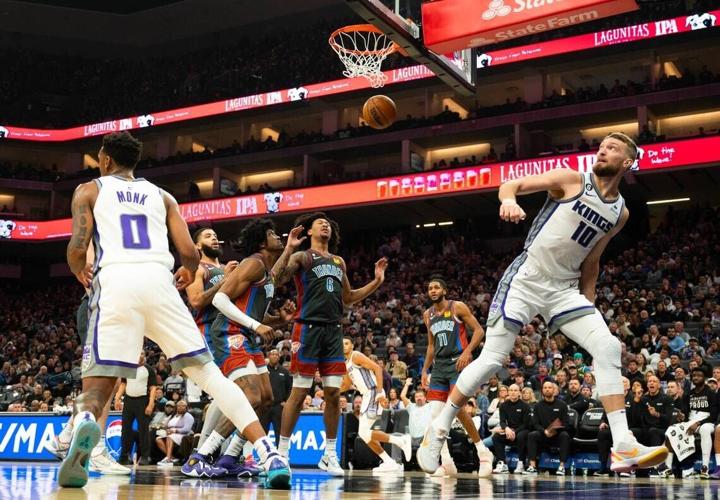 Sacramento forward Domantas Sabonis looks back after he scores a basket around Oklahoma City’s defense during Friday’s NBA game in Sacramento, Calif.

Sacramento forward Domantas Sabonis looks back after he scores a basket around Oklahoma City’s defense during Friday’s NBA game in Sacramento, Calif.

SACRAMENTO, Calif. – Returning to the Pacific time zone has generally made it easier for Domantas Sabonis to keep up with Gonzaga, but he was preoccupied last Thursday and unable to watch the Bulldogs’ 68-67 loss to Loyola Marymount, which snapped a 75-game home win streak.

Instead, the two-time NBA All-Star heard about the result from his financial adviser, a Loyola Marymount alum.

No different from any other Gonzaga fan, Sabonis rides the emotional highs and lows of his former college, which meant razzing Sacramento King teammates and former Kentucky players De’Aaron Fox, Trey Lyes and Malik Monk when Gonzaga took down the Wildcats in Spokane earlier this season, but also hearing from his financial adviser when the Bulldogs were dealt a rare home loss last week.

The lumps Gonzaga has taken this season are relative. The Bulldogs are still on track to extend the program’s NCAA Tournament streak, they hold a top-15 national ranking and still control their own fate in the West Coast Conference with two games against first-place Saint Mary’s during the final month of conference play.

But as Mark Few continues to raise the standard at Gonzaga, making eight consecutive trips to the Sweet 16, advancing to two of the past five national championship games and compiling a 192-18 record since Sabonis left school, expectations are adjusted accordingly.

This year’s group enters February with four losses – something that hasn’t happened since 2017-18 – and the Zags have a smaller margin for error if they hope to nab a high NCAA Tournament seed and win their 11th straight WCC regular-season championship.

That all sounds familiar to Sabonis, whose 2015-16 Zags lost five games before Jan. 21 and dropped two more before the regular season ended before rallying to win regular season and conference championships.

“You’ve got to peak at the right moment. Obviously, if you’re not doing well during the season, you’ve got to win our (conference) tournament,” Sabonis said. “But they’re in great position, I feel like they’re going to be great. I think it’s good we’re not going to have all this pressure like we do every year. Maybe we get lucky with the seedings and anything can happen.”

From All-American post players (Sabonis and Drew Timme) to first-year starting point guards (Josh Perkins and Nolan Hickman), the 2015-16 Zags and 2022-23 Zags have more than a few commonalities. Sabonis’ team faced immense pressure, not only grappling with seven regular-season losses but also the attention and time demands from an HBO film crew chronicling the Zags for a five-episode program titled “Gonzaga: The March to Madness.”

“We had to win at BYU, we were on the road, then we had to win the (WCC) tournament,” he said. “We had HBO following us around all year, so it definitely was a lot of pressure. We didn’t want to be the team that broke the streak, you know what I mean? Especially for coach Few and what he’s built. It didn’t seem fair, but if anything it just made the season way more fun.”

Sabonis still laments how that season ended, with a three-point loss to Syracuse in the Sweet 16: “Still feel like we should’ve made it to the Elite Eight.”

It should come as no surprise that Sabonis is a fan of Timme, who possesses many of the same tools as the eighth-year pro. Both have strong frames, soft touch around the rim and elite footwork that allows them to maneuver around bigger defenders.

“He’s a problem in college, you clearly see four years in a row he’s been doing his thing,” Sabonis said. “I just wish him all the best of luck and hopefully this year they can take it home.”

Timme, who’s tied for fourth in the country at 22.0 points per game, needs 16 points to become the third player in school history with 2,000 career points (Jim McPhee, Frank Burgess). Sabonis thinks there’s a spot for the Gonzaga senior in the NBA, even though pundits and analysts question his ability to play on the perimeter and consistently knock down 3-pointers.

“He’ll shoot it,” Sabonis said. “I say from college until you declare for the draft and you get to the NBA, those couple months of working out with NBA ball … I feel like everyone becomes a better shooter automatically. He’s a hard worker, he puts so much work into his craft. For sure, I have no doubt he’ll be capable of knocking down the 3.”

Sabonis said he watches the Zags on a regular basis and keeps a close eye on the Arizona Wildcats, who are coached by Tommy Lloyd, the former GU assistant who recruited the Lithuanian big man to Spokane.

“I have to do better, coach Few probably hates me, I’m really bad at responding to text,” Sabonis said. “Everyone knows that about me, so I’ve actually got to call him back.”

On Monday night, Sabonis posted his sixth triple-double of the season and 23rd straight double-double, scoring 14 points to go with 11 assists and 10 rebounds in Sacramento’s 133-100 win over Memphis at the Golden 1 Center.

Sabonis has a league-leading 36 double-doubles this season and he’s averaging an NBA-best 12.5 rebounds per game. On the precipice of his third All-Star appearance, and potentially his first as a starter, Sabonis has been at the center of Sacramento’s rebuild and one of the main reasons the Kings are on track to break the NBA’s longest playoff drought at 17 seasons.

“Everyone’s excited, everyone’s hungry,” Sabonis said. “We all feel like we have chips on our shoulder and we have something to prove. More, I feel like, individually as a team than previous, in the past, with what’s been going on with this franchise.”

Sacramento, sitting at 27-19, moved within 3½ games of the Grizzlies for second in the Western Conference with Monday’s victory. The Kings sent Tyrese Haliburton to the Indiana Pacers for Sabonis in a blockbuster trade last season, acquiring the former Zag with 26 games remaining. Sacramento continued to retool its roster in the offseason, beginning with the hire of Brown, a former Warriors assistant.

“To be part of something special, you’re trying to build, create some big changes,” Sabonis said. “That’s why I was traded here. To try and change this franchise around. They did a great job this summer of bringing in pieces and a head coach and it’s been working.”