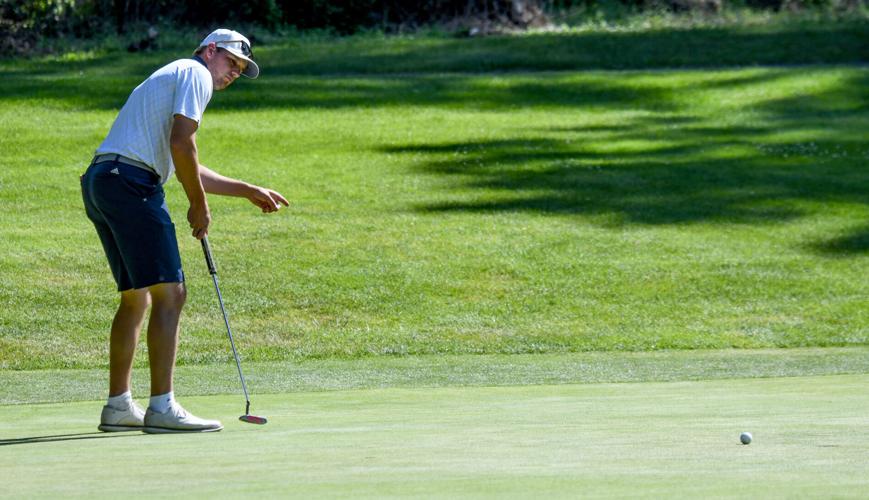 Daniel Campbell directs his birdie putt into the cup on No. 17 Sunday at the Rosauers Open Invitational. 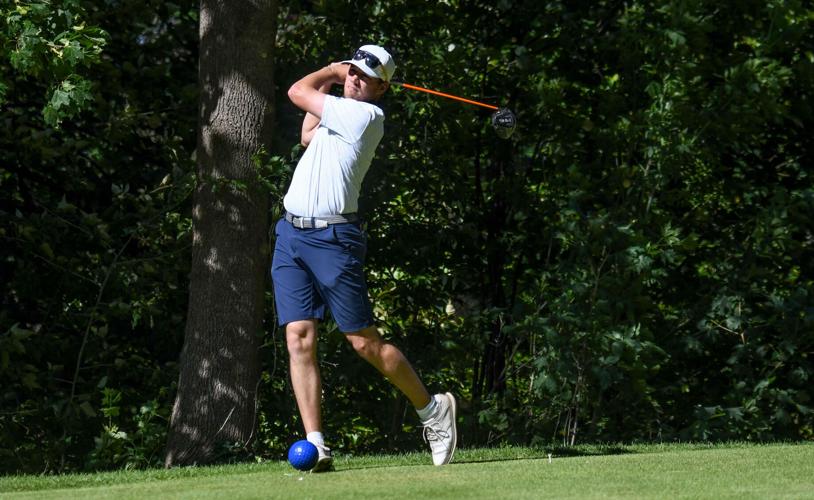 Daniel Campbell launches a tee shot during the final round of the Rosauers Open Invitational at Indian Canyon. Campbell went on to win the tournament. 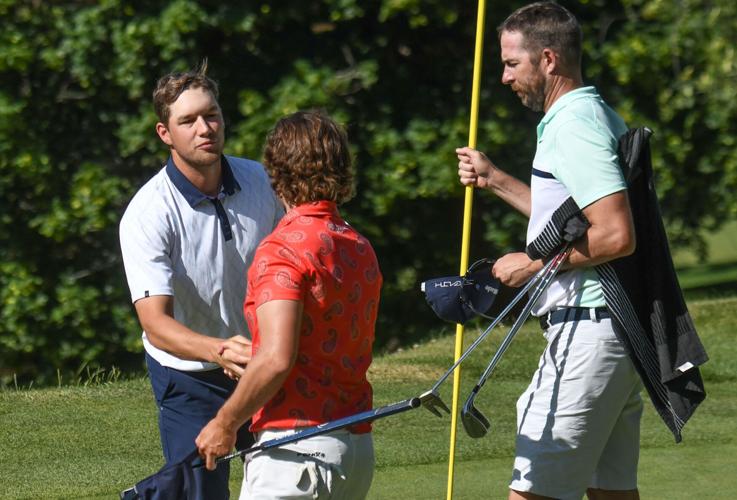 Daniel Campbell (left) shakes hands with Blake Snyder as Scott Erdmann passes by on the 18th green after Campbell won the Rosauers Open Invitational on Sunday. 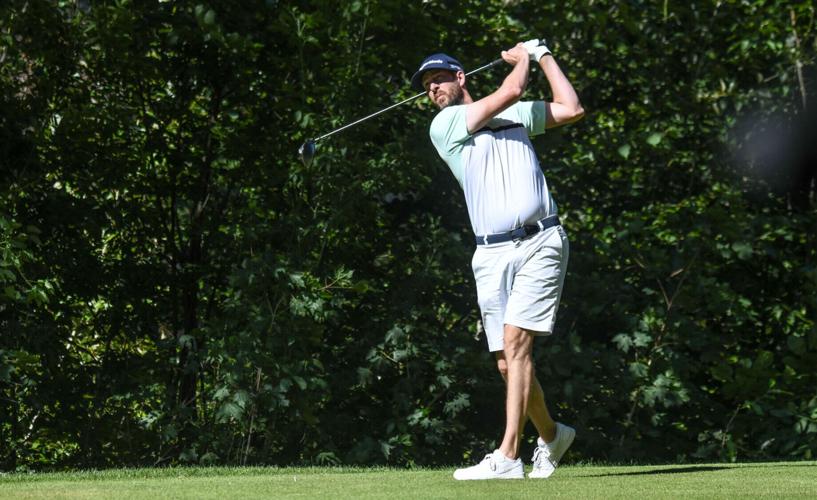 Daniel Campbell directs his birdie putt into the cup on No. 17 Sunday at the Rosauers Open Invitational.

Daniel Campbell launches a tee shot during the final round of the Rosauers Open Invitational at Indian Canyon. Campbell went on to win the tournament.

Daniel Campbell (left) shakes hands with Blake Snyder as Scott Erdmann passes by on the 18th green after Campbell won the Rosauers Open Invitational on Sunday.

The easy decision for Daniel Campbell was hitting driver on No. 17 at Indian Canyon – a risk-reward, drivable par 4 – while sharing the Rosauers Open Invitational lead, even after playing partner and co-leader Scott Erdmann had already found the fairway with iron off the tee.

“I hit driver there every day,” Campbell shrugged.

The hard part was the chip after Campbell’s drive came to rest nearly pin high, but 15 yards right of the green with the pin tucked in back on a small plateau that looked even smaller from where his ball was nestled in light rough. He had very little green to work with, and he was probably facing a 50-foot putt if his chip shot didn’t climb up to the proper level.

Campbell hit a world-class chip, cleverly pitching the ball into the rough on a sidehill behind the green. His ball trickled onto the green and he buried a speedy 9-foot birdie putt. Erdmann then made a par after a nifty up-and-down of his own.

Campbell kept the throttle down on the par-5 No. 18 with a two-putt birdie to polish off a bogey-free 6-under 65 Sunday and a two-stroke victory over Erdmann and Tyler Carlson, assistant pro at Quail Ridge in Clarkston.

“That was pretty good,” Campbell deadpanned of the chip. “I knew it was firm enough on the sidehill that if it landed there it would bounce down. I actually played it a little farther right than I wanted to, but it still came down.”

“It was awesome,” said Erdmann, director of instruction at Oswego Lake Country Club near Portland. “He had to be pretty creative because he couldn’t go at the pin and then he had a brutal putt on top of it. So he hit a great shot to get himself into a tough position and then he made it, so good for him.”

“That was spectacular,” said Blake Snyder, the third member of the final group who finished tied for fourth with Jeff Coston. “I was kind of joking with him, too, as a lefty with that ball sitting below his feet, the toe (of the club) will tend to hang a little bit so it’s really hard to catch that clean enough. He went for it and you have to hit those shots to win tournaments. When he made the putt, I was like, ‘That’s how you win the tournament right there.’”

Campbell, who trailed Erdmann and Snyder by one entering the final round, collected a $10,000 check after shooting 16-under 197 in the 54-hole event. The assistant pro at Bellingham (Washington) Golf and Country Club made his first PGA Pacific Northwest Section win memorable by claiming one of the section’s six majors in his Rosauers debut.

Campbell, 30, looked like he was enjoying a leisurely Sunday stroll throughout the round, even though a crowded leaderboard often had six players within two shots of the lead. He only missed three greens in regulation, but scrambled for pars on Nos. 5, 7 and 12. All three required deft chips and momentum-building par putts.

“That’s the plan, yeah, try to be nice and calm,” said Campbell, who played at Skagit Valley College and finished at University of the Fraser Valley in Abbotsford, B.C. “The heart was racing a little bit on the last few holes, but I’m always pretty calm on the course, even in college. It’s my happy place. Tournament golf is my happy place.”

Campbell, 2019 Rosauers champ Erdmann and three-time winner Coston got off to blazing starts. Campbell and Erdmann both birdied the first three holes and Coston played the same stretch in 4 under with an eagle on the par-5 second hole. Coston shared the lead on a couple of occasions but he lost ground with five straight pars to conclude his round.

Erdmann dropped two shots behind with three front-nine bogeys but joined Campbell at 14 under with a birdie on No. 15. Snyder, teaching pro at Pacific Northwest Golf Academy in Issaquah, Washington, and a former Washington State Cougar, rallied from a slow start with four birdies in five holes on the back side to reach 13 under.

“I couldn’t have asked for a better start with three in a row,” Erdmann said. “The three-putt on No. 5 and the short (missed putt) on No. 7 stung a little bit, but I didn’t really let it bother me. I’ve had so many rounds in the past where I’ve let those things get to me. I kind of stayed the course. It was good to get (three) birdies on the back.”

There are several times during the school year when families or schools host ceremonies for high school student-athletes to sign a national letter of intent to continue their pursuits at the college of their choice.

It was like any other day for Katie Thronson at the University of Tennessee – she’d wake up, go to practice, get a run in with her teammates and spend the rest prepping to run her fifth year for the Lady Volunteers.

If you go online to look for information on Justin Sands' high school track and field career, you won't find much. Sands, a two-year starter for the Mead boys basketball team, just took up the sport for his senior season.

IHSAA Approves Use of Shot Clock in Basketball Games