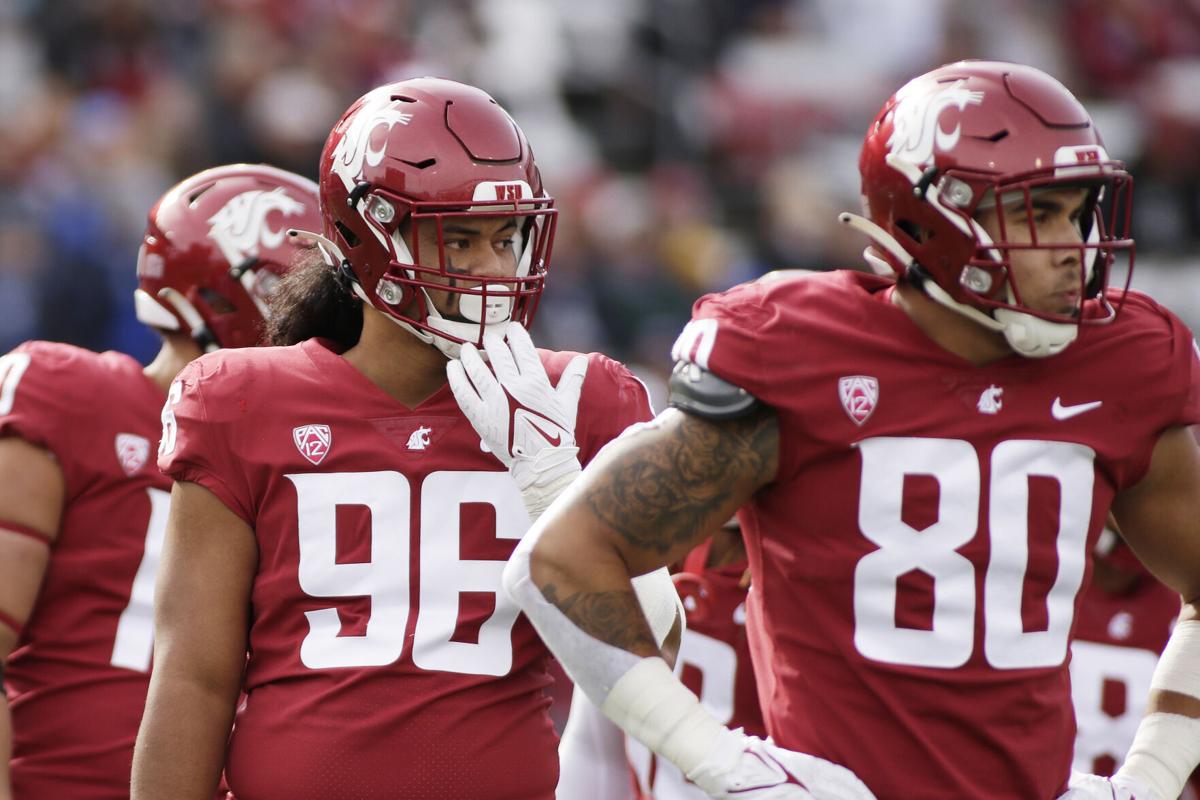 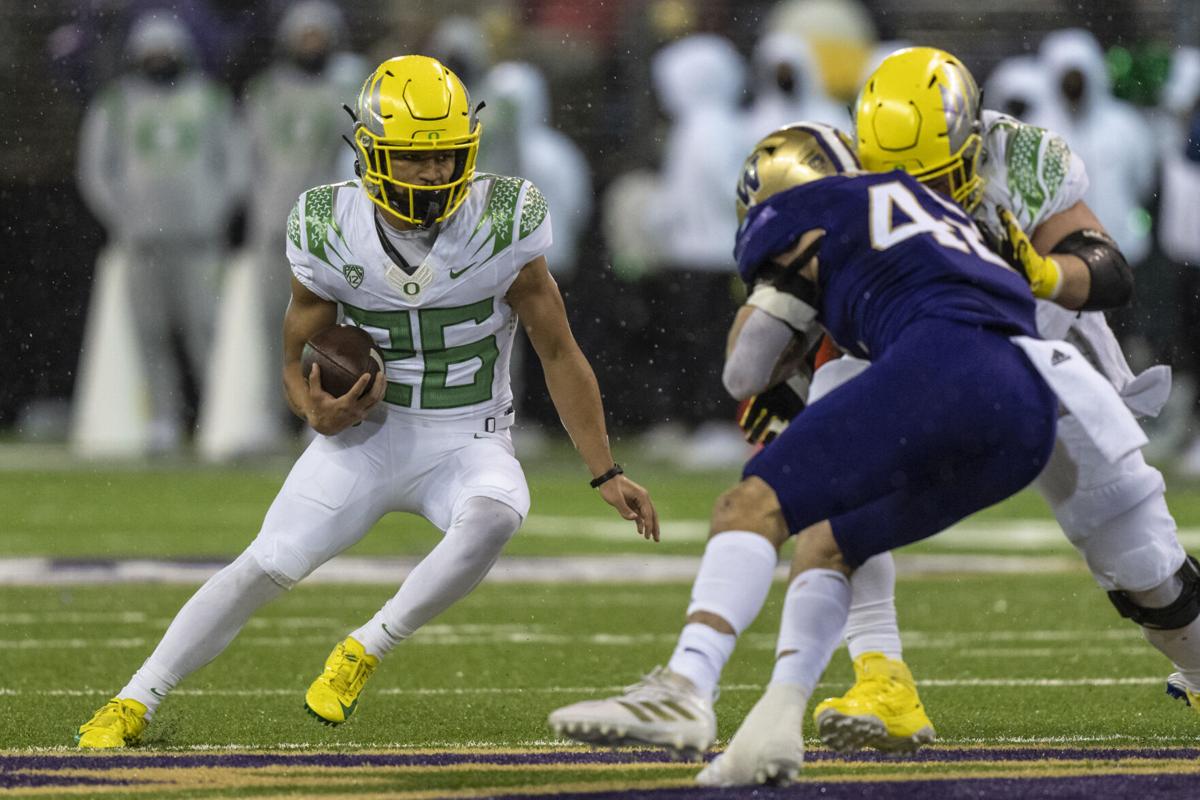 Oregon running back Travis Dye runs behind a blocker during a Pac-12 game against Washington on Saturday in Seattle.

Oregon running back Travis Dye runs behind a blocker during a Pac-12 game against Washington on Saturday in Seattle.

“That’s easy,” Washington State’s interim football coach said Wednesday. “The strength of their team is at both lines of scrimmage.”

The Ducks (8-1, 5-1 Pac-12) have leaned on a formidable ground game and a fearsome front seven this season.

Their offensive line is made up entirely of second-year starters – including a couple of all-conference players and one of the nation’s top centers – and their defensive box features a pair of clear-cut NFL prospects and a host of next-level youngsters.

Adding to the intrigue of an already compelling matchup, WSU’s effectiveness up front has been trending upward throughout the season.

The Cougars are more than capable at the line of scrimmage. But they’ll need perhaps their finest performance of the year if they hope to knock off UO and depart Eugene atop the Pac-12 North.

The Cougars (5-4, 4-2) meet the Ducks at 7:30 p.m. Saturday at Autzen Stadium in one of the most significant games for WSU in recent memory.

The visitors are coming off a bye week after they dismantled Arizona State 34-21 in Tempe, a runaway victory in which the Cougars outmuscled the Sun Devils – who pride themselves on defensive pressure and rushing prowess.

Oregon demonstrated its physical play last weekend in rainy Seattle, handling Washington 26-16 behind 329 yards rushing and another dominant showing from its defensive line and linebackers.

“We take a lot of pride in it,” Ducks coach Mario Cristobal said after the success of his team’s ground game, which was key in UO keeping possession of the ball for 36:33. “We felt that, even though we’ve been down a couple of offensive linemen, that we could find ways to establish the line of scrimmage and take control.”

The Ducks will be without injured guard Ryan Walk, but they should be healthy otherwise on the O-line.

Center Alex Forsyth headlines Oregon’s trenches. He’s on the preseason watch list for both the Rimington and Outland trophies, which honor the top center and interior lineman in the FBS, respectively.

Oregon ranks third in the Pac-12 with 218.9 rushing yards per game and 5.4 yards per carry. The Ducks’ rushing numbers have improved over the past two years after they graduated the majority of their O-linemen in 2019 – a group that boasted four future NFL players, including first-rounder Penei Sewell.

For the most part, this veteran-laden Ducks O-line is the same one that spearheaded a 269-yard rushing day in Oregon’s 43-29 win over the Cougars last season.

“They’ve really done a good job of mastering their craft,” said WSU edge Brennan Jackson, who will square off against a former high school rival in UO tackle Steven Jones. The two played against each other in California’s Southwestern League, when Jackson suited up for Great Oaks High and Jones for Chaparral.

“It’s going to be a fun matchup to see what we can do against those guys.”

Clearly, Cristobal emphasizes O-line play. He was a standout tackle for Miami from 1989-92, helping the Hurricanes to two national titles under former Idaho boss Dennis Erickson. He taught offensive lines at three of his past coaching stops, and held that same position in 2017 at Oregon before being promoted into the top job a year later.

Since Cristobal took over, the Ducks’ O-lines have consistently ranked among the Pac-12’s best.

“It’s not just good players. They’re coached well and their schemes are detailed and they attack people from week to week, and they win the game at the line of scrimmage,” Dickert said.

Oregon runs the ball on 60% of its plays, and has scored a Pac-12-best 27 touchdowns on the ground compared to just 13 passing TDs. The Ducks have allowed only 13 sacks, which ranks 29th nationally.

Star running back C.J. Verdell was lost for the season when he suffered a leg injury Oct. 2 against Stanford. But feature back Travis Dye, who Cristobal called “one of the best players in college football,” has stepped in admirably, accumulating 820 yards (211 last week) on 134 attempts for an average of 6.1 yards per tote.

“He’s hard to bring down. He’s fast and quick and he hits the holes,” Dickert said of Dye. “We need to tackle well. We need to play well up front. It goes back to the same thing I said going into Arizona State: We gotta win some first downs and get them behind the chains.

“It starts with stopping the run, and (Dye) is a big part of that, so we’re going to have to contain him the best we can, because he’s ready to hit the big one at any time.”

Don’t be surprised if the Cougars “get an extra hat in the box” more often than usual this weekend and “take some chances” with additional pressure packages to get Oregon behind the chains on early downs, Dickert noted.

WSU’s five-man defensive tackle rotation has been up-and-down this year. It had arguably its most productive showing at ASU, allowing Dickert to dial up more exotic speed-rush sets on third downs that use four edges and blitzing linebackers.

While WSU’s defense has had a knack for opportunistic plays and has become one of the country’s elite in forcing takeaways, it hasn’t proven consistent in limiting potent running games, conceding 238 yards to BYU and 309 to Oregon State.

“We really have to hold up on the interior of our D-line,” Dickert said. “And our edges, who have been … the most consistent group within our defense, have to be disruptive, and have to have a good game. They have to play the way they’re capable of playing because we have a lot of playmakers in that group. The D-line will be challenged for 60 minutes. They (the Ducks) are a style that can wear you out a little bit.”

Oregon’s defense, meanwhile, has held six of its opponents to under 130 yards rushing and pocketed 18 sacks. It limited Washington to just 55 yards on the ground last weekend.

The Ducks’ linebackers seemed to be an area of concern earlier in the season, when three two-deep LBs sustained serious injuries. But several younger players have filled in without drop off up front, and Oregon’s defensive line has been a steady force throughout the year.

Front-seven underclassmen Bradyn Swinson, Treven Ma’ae and Brandon Dorlus have combined for 11 tackles for loss and seven sacks. Captaining the defense is sophomore edge rusher Kayvon Thibodeaux, who’s expected by most football experts to be a top-five draft pick.

It’ll be a stiff test for a WSU run game and O-line that appear to be trending upward after a rocky start.

“Let’s work on the fundamentals, let’s win on the little things and that’ll lead to success. The line of scrimmage is going to be a big point of emphasis.”