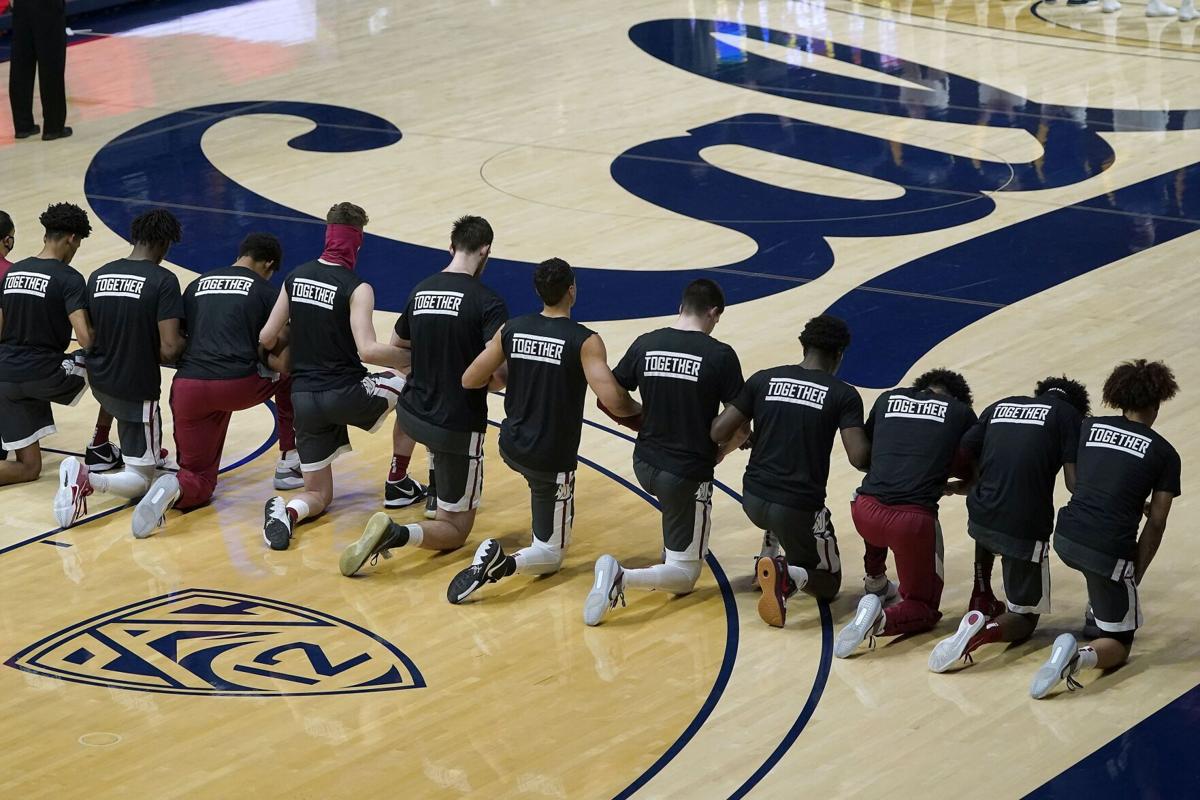 Eleven of Washington State’s players kneel during the national anthem before a Pac-12 Conference game against California on Jan. 7 in Berkeley, Calif. 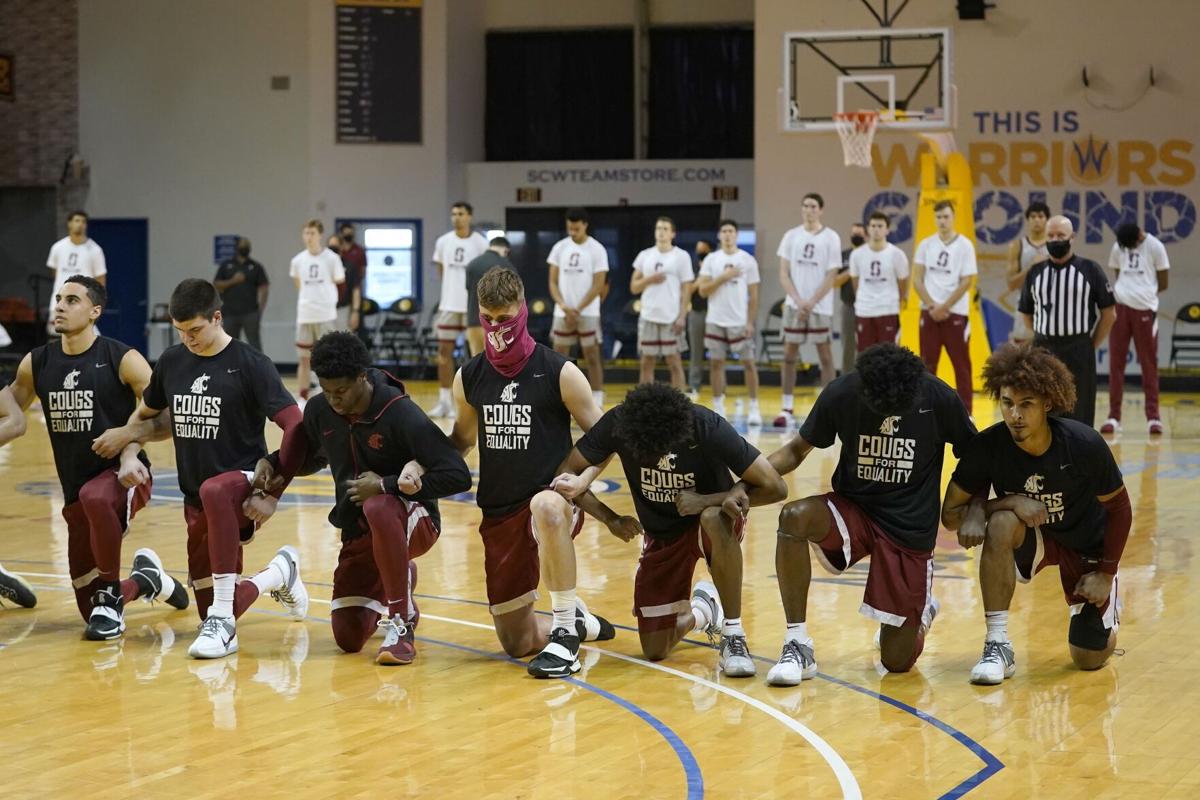 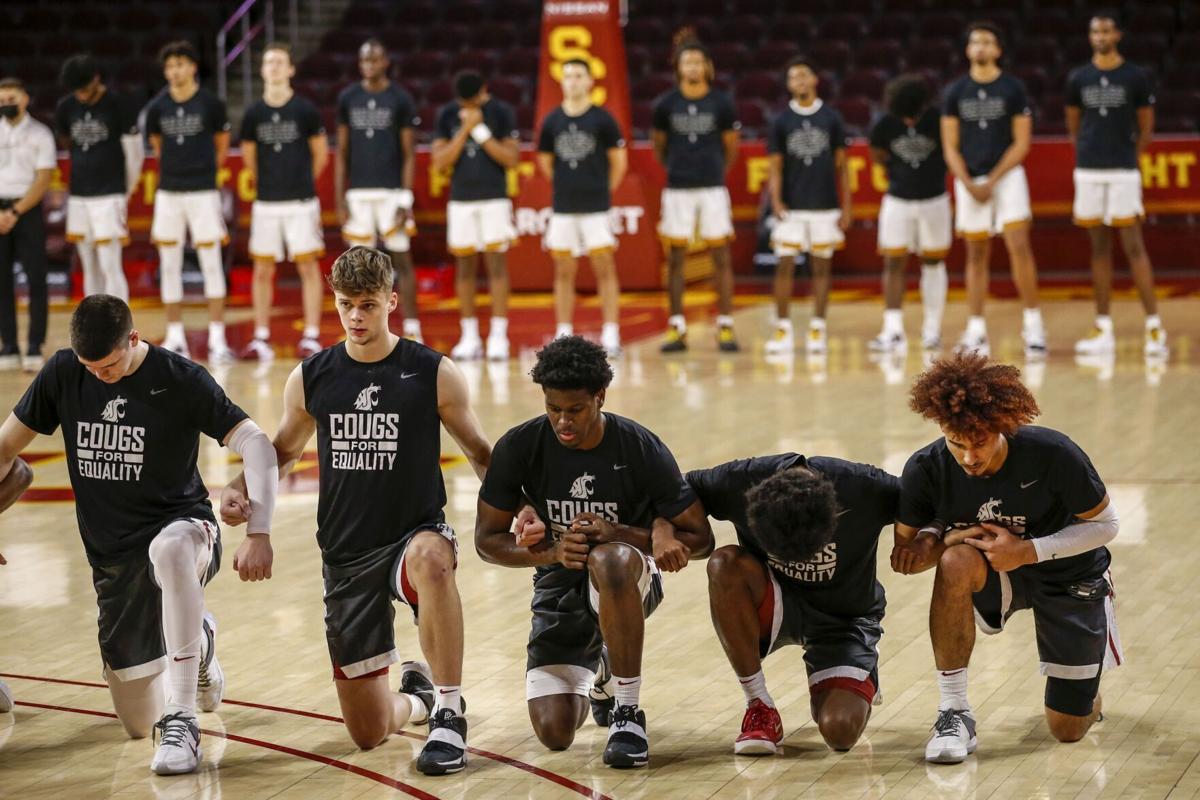 Five Washington State players take a knee during the national anthem prior to Saturday’s Pac-12 contest against Southern California at the Galen Center in Los Angeles. 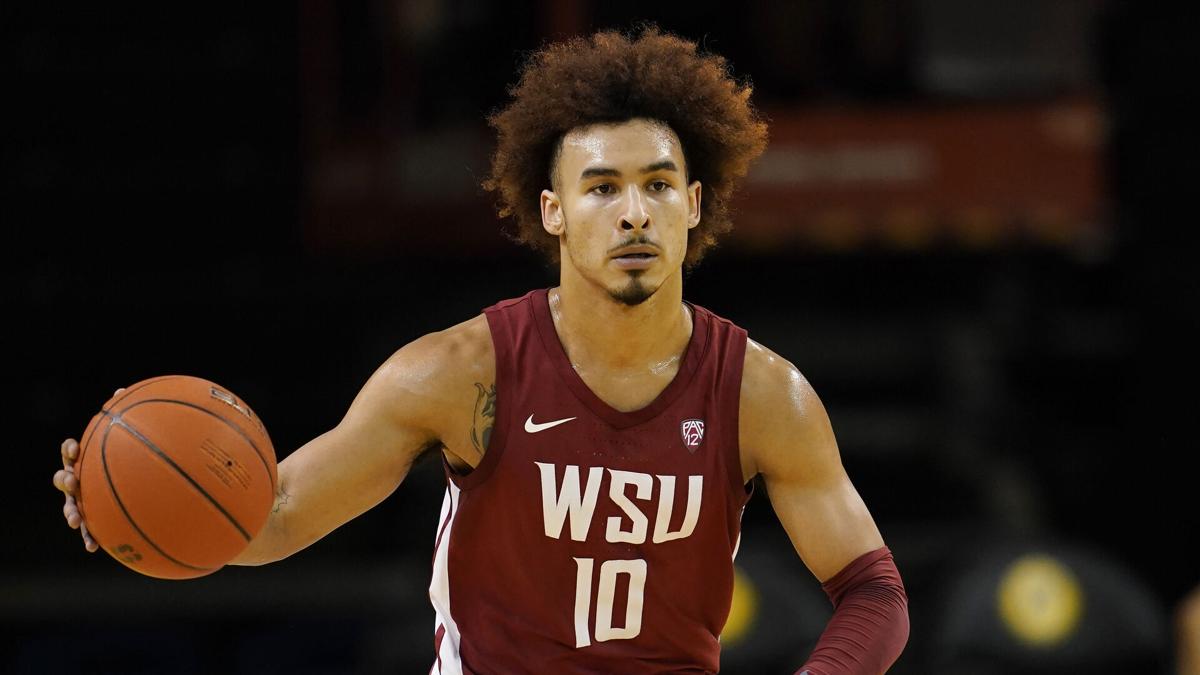 Eleven of Washington State’s players kneel during the national anthem before a Pac-12 Conference game against California on Jan. 7 in Berkeley, Calif.

Five Washington State players take a knee during the national anthem prior to Saturday’s Pac-12 contest against Southern California at the Galen Center in Los Angeles.

He’s been the engine of Washington State’s offense this season, averaging a conference-high 21.7 points in Pac-12 games, but Isaac Bonton recently approached coach Kyle Smith with a play call that had nothing to do with high ball screens or pick-and-rolls.

In fact, it had little to do with his role as a senior point guard for WSU’s basketball team, but rather as an ambassador for a much larger community – one that’s largely felt mistreated, underrepresented and unheard as racial tensions in the United States have escalated over the past six to 12 months.

One day after supporters of President Donald Trump carried out attacks on the U.S. Capitol, Bonton and the Cougars were scheduled to play their first road game of the 2020-21 season at California. Individually, various WSU players reacted on social media to the images and videos that surfaced from the violent disorder in Washington, D.C., which coincided with prosecutors declining to file criminal charges against the Kenosha, Wisconsin, police officers who shot Jacob Blake, triggering days of protest.

“WHITE PRIVILEGE IS ALL I CAN SAY... No surprise,” sophomore guard Noah Williams tweeted, conveying a widespread opinion that repercussions of the attacks would have been more severe if the majority of rioters had been African American.

Collectively, the Cougars felt they could make a bigger, bolder statement by doing something as a group.

“Isaac reached out to me and he said they’d been discussing it. Said they want to kneel and I said, ‘I have no problem with it,’ ” Smith said. “It’s America, we can express our beliefs and everything we want to do. So that was that.”

Partaking in a peaceful demonstration that was popularized by former San Francisco 49ers quarterback Colin Kaepernick, the Cougars took a knee during the national anthem prior to their Jan. 7 game at Cal.

“Basketball aside, it’s really important what’s going on in this country right now and very divided right now I feel like,” Bonton told reporters on a Zoom call after the UCLA game.

“That’s one of the things we as a team talked about. It wasn’t just me, it was other guys, too. We all talked about it and agreed, because it’s important for us, for our culture, for who we are as a country. Just moving forward, I feel like all this division and there’s a lot of things going on that’s unjust right now. We’ve got to find a way.”

The Cougars knew their decision would be met with pushback from those who deem the gesture unpatriotic, and various Twitter users voiced their displeasure when photos and videos emerged. That didn’t deter them from getting their message out a second or third time.

WSU players, and a majority of the coaching staff, knelt before their next game against Stanford in Santa Cruz, California, didn’t do so at UCLA, but again took a knee before their most recent game at USC.

“Just as we do as a team, find ways to get better and win, we’ve got to do that as a country,” Bonton said. “Find ways to come together, instead of be divided.”

Of the 15 players on WSU’s 2020-21 basketball roster, seven hail from countries other than the U.S: Nigeria, Ukraine, Slovenia, North Macedonia, the Dominican Republic, Canada and Australia. So, while the majority may not share the same background and experiences, they were empathetic to what Bonton and other teammates felt last summer as protests erupted in response to police brutality against African Americans, and again last week, when mostly white rioters stormed the Capitol.

“It’s awesome, man,” Bonton said. “I asked the guys, and I think they kind of have an idea of what’s going on. They might not know the details of it, being from other countries, but it’s important for us to all be together. We wear that on the back of our shirts, talk about equality and togetherness. That’s big for us. I was proud of them, and it just made me happy, it made me feel good we’re all on the same page. That shows the sign of a great team, too.”

Over the summer, in the midst of protests that stemmed from the killing of George Floyd in police custody, Williams shared a chilling story of being held at gunpoint by a police officer after a 2018 concert in the Seattle area. He and a good friend, Duke basketball commit Paolo Banchero, were wrongly accused of stealing a white Jeep the former O’Dea teammates had driven to the concert. The car belonged to Williams’ mother, and the King County Sheriff’s office later issued an apology to both boys.

For much of the season, WSU players have worn black pregame shirts with messaging reading “Cougs for unity” on the front and “togetherness” on the back.

Smith acknowledged he’d be proud of his players regardless, but commended their courage for being “that age and trying to gauge where we are in the world and what’s going on, and being aware and feeling comfortable enough where you can express yourself.”

The pregame demonstrations haven’t necessarily been conferencewide, but Arizona State players knelt for both of ASU’s games two weeks ago, as did the Sun Devils’ opponents, USC and UCLA.

Oregon’s women’s team has had three players kneel individually, while the women’s teams at Stanford and Colorado both went to the locker room before the anthem was played Sunday in Boulder, returning to the court for warmups immediately when it finished.

In a recent conversation with The Spokesman-Review, WSU Athletic Director Pat Chun said he was fully supportive of the decision made by the Cougar men.

“They’re empowered to make decisions for the right reasons, and I support them 100% if their will and desire says that’s how they want to peacefully send a unified message out,” he said. “... To me, they were hurting, they saw what was going on around the country and decided to have a unified message.”